Pink or Nasir-ol-Molk Mosque a Revolution in Islamic Architecture

House of Strength or Zourkhaneh a Place for Heroic Rituals 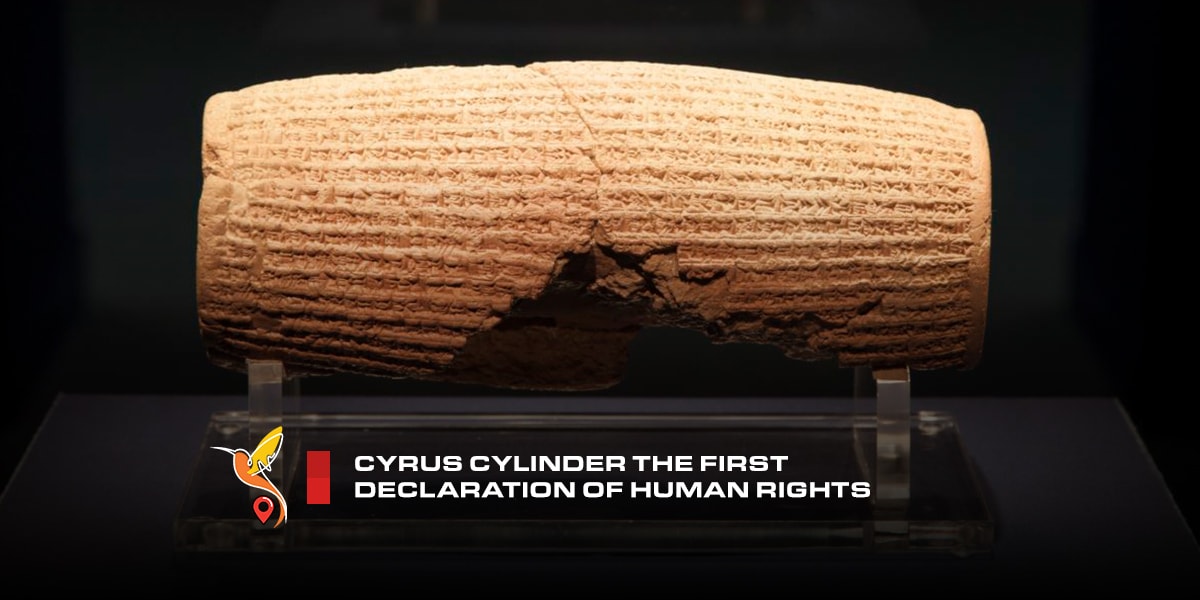 Pasargadae is one of the highly recommended sites that each Shiraz travel guide offers you. Everybody knows where Cyrus the Great’s tomb is. It attracts hundreds of tourists every year. What’s all the fuss about? He was a great king. OK. But there were other great kings, too. Did he do something hugely different? Yes. He established the first Human Rights Declaration. Something that was unprecedented and remained unique for tens of centuries later. In this article, we’re going to read about the first Human Rights Declaration. It is also known as the Cyrus Cylinder.
Around the year 1285 (1879-1882), while excavating in Babylon (Mesopotamia), the Iranian archaeologist Hormuzd Rassam found a small cylinder made of baked clay (23 cm). It contained an inscription from Cyrus the Great. It was what we today know as the Cyrus Cylinder, or the first Human Rights Declaration. 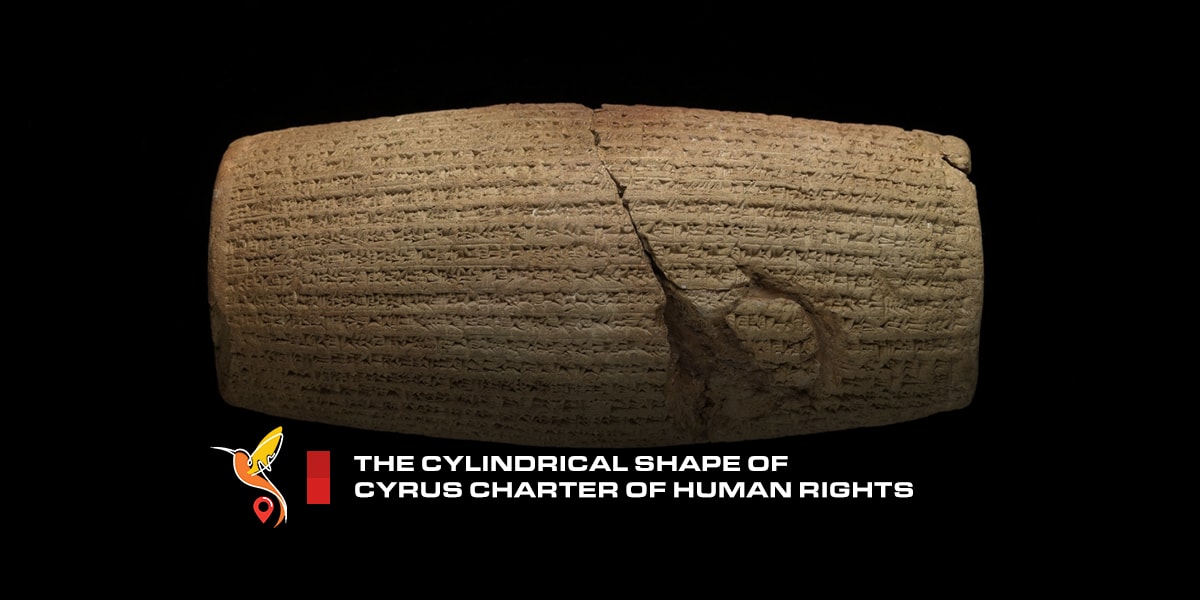 The makers of the cylinder used baked clay to make it. It is 23 cm long and 11 cm wide. It has about 40 lines written in the Akkadian language and Babylonian cuneiform.

History of the losing part of Cyrus Cylinder Human Rights 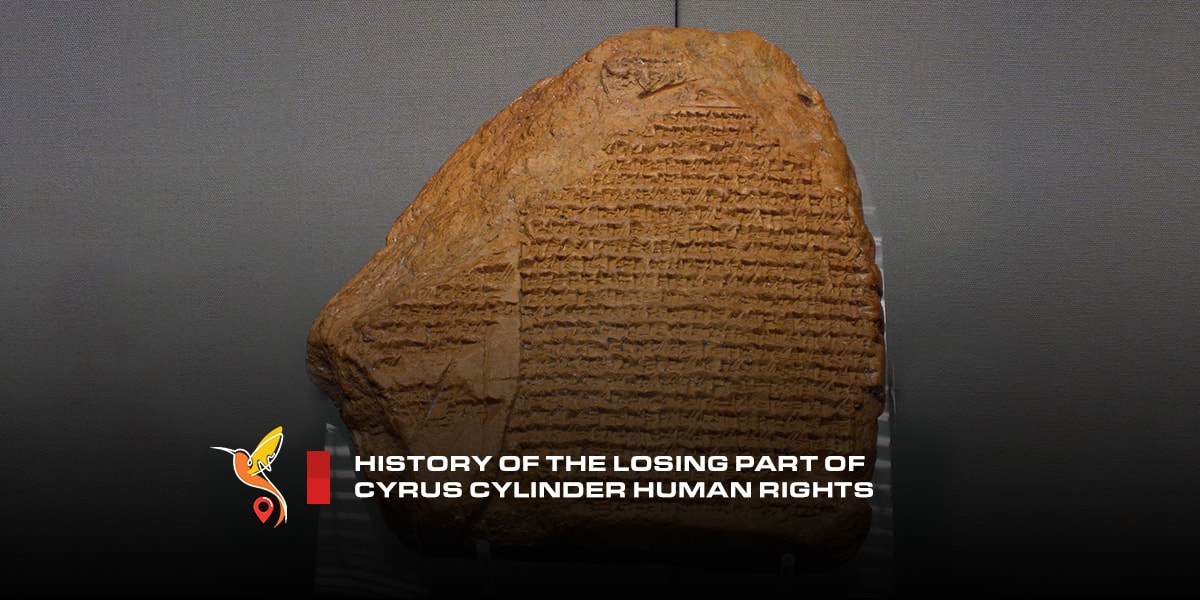 Studies show that the cylindrical inscription goes back to the year 539 (AC). Cyrus the Great wrote it after the defeat of Nebuchadnezzar II and the opening of the city of Babylon. People placed it as a monument in Babylon. The cylinder is now in the British Museum in London. On the other hand, it has become apparent in recent years that part of a cylindrical slab, which people previously thought to be belonging to King Nebuchadnezzar of Babylon is, in fact, part of the larger Cyrus cylinder. It contains the missing lines 36 to 43. This part was at Yale University in America. After the discovery of the fact, they sent it to the British Museum. There, They attached to the main cylinder.

After the coronation, Cyrus read the Charter of Freedom of Humanity at the Temple of Marduk, The Great God of Babylon. The text of Cyrus’ lecture and the cylinder was not clear until recently. In discovery in Mesopotamia among the ancient ruins of the city of Ur, experts found a written record. After the translation, they understood that it was the same text as the Cyrus cylinder of Human Rights.
The Cyrus Human Rights Decree, or Cyrus’ Cylinder, is the oldest written document of justice and human rights practice in Iranian history. 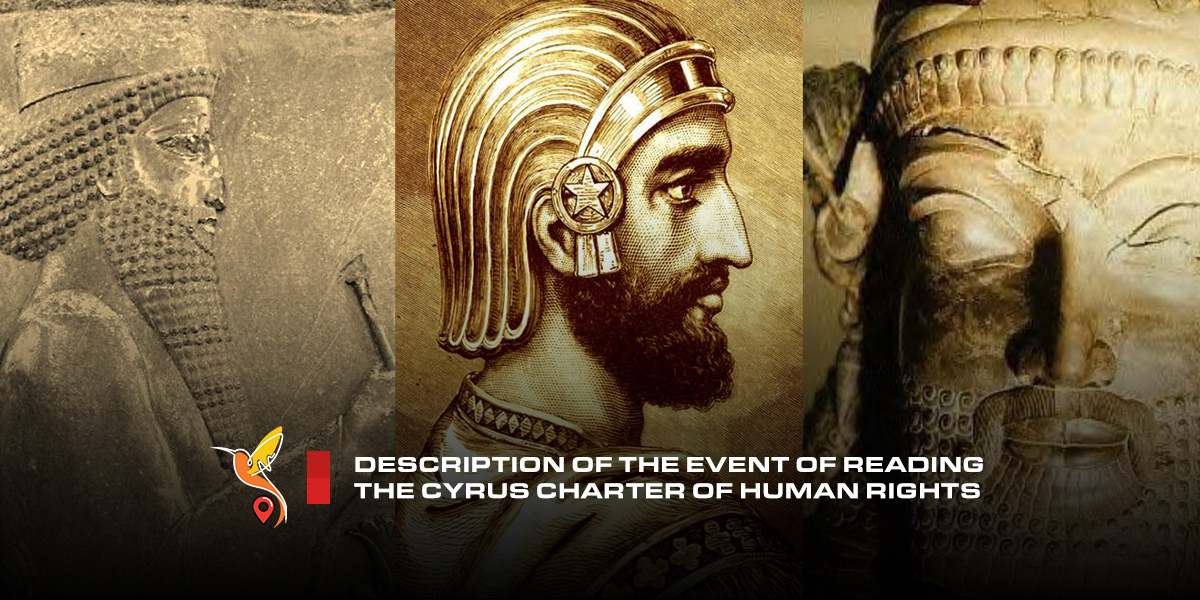 When the cyrus the great read the charter of human rights

Cyrus was the founder of the Iranian kingdom and the initiator of the Achaemenid dynasty. After the conquest of Babylon, Cyrus proclaimed a general amnesty. He declared the indigenous religions free. Also, he recognized Marduk, the ancient God of Babylon. He did so to encourage people to live together even with different beliefs. Plus, he bowed in front of him, kissed his hands, and prayed and thanked him. He did not enslave any human groups. He also prevented his men from the invasion of the property and life of people. He brought together all the former inhabitants of the lands and returned them to their homes.

This document is the first charter of human rights. In 1971, the United Nations published it in all official languages of the Organization. This is a confirmation that the Charter of Freedom of Humanity can outweigh the Human Rights Declaration by the French revolutionaries. The French issued their Declaration at their first national assembly. The Declaration of Human Rights is considerable in its kind in terms of expression and structure. However, the Charter of Freedom issued by the Persian king (Cyrus) 23 centuries preceding that seems more spiritual. 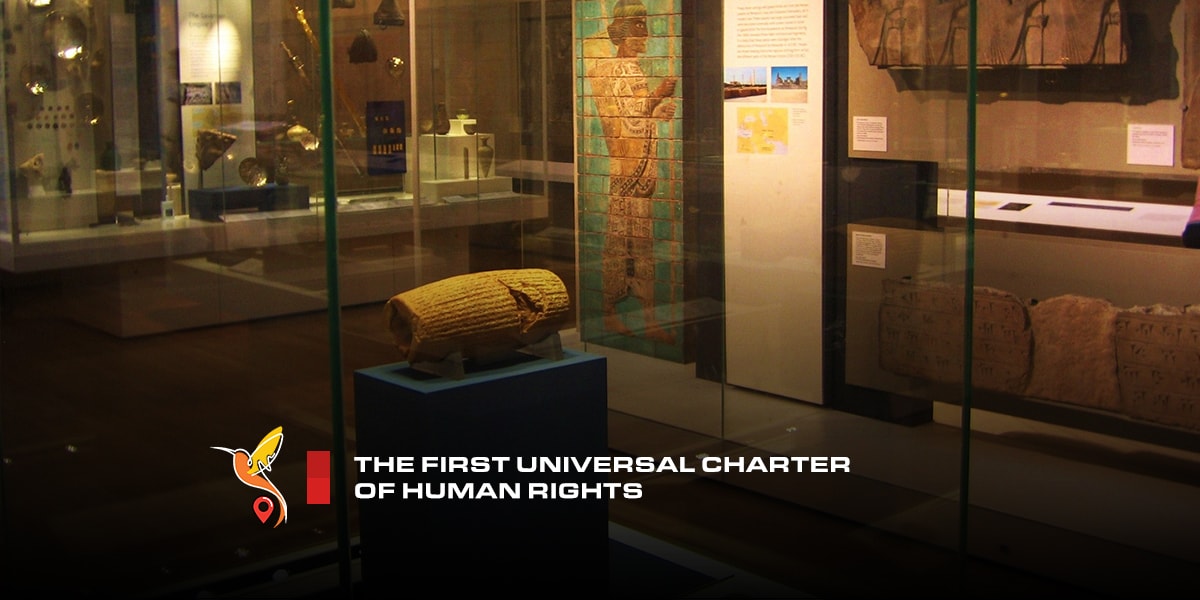 cyrus cylinder in the britain museum

The Cyrus Cylinder is the first Universal Declaration of Human Rights. People put it in Babylon after the conquest of Babylon and the defeat of Nebuchadnezzar II by Cyrus. They saw it as the cornerstone of Babylon. The Babylonian tribes who had been captives of Nebuchadnezzar II were now free. They had permission to move and live freely anywhere in their empire. Cyrus the Great of Iran also freed the Jewish people from captivity in the Babylonian Empire.

The First Founder of Human Rights and Freedom 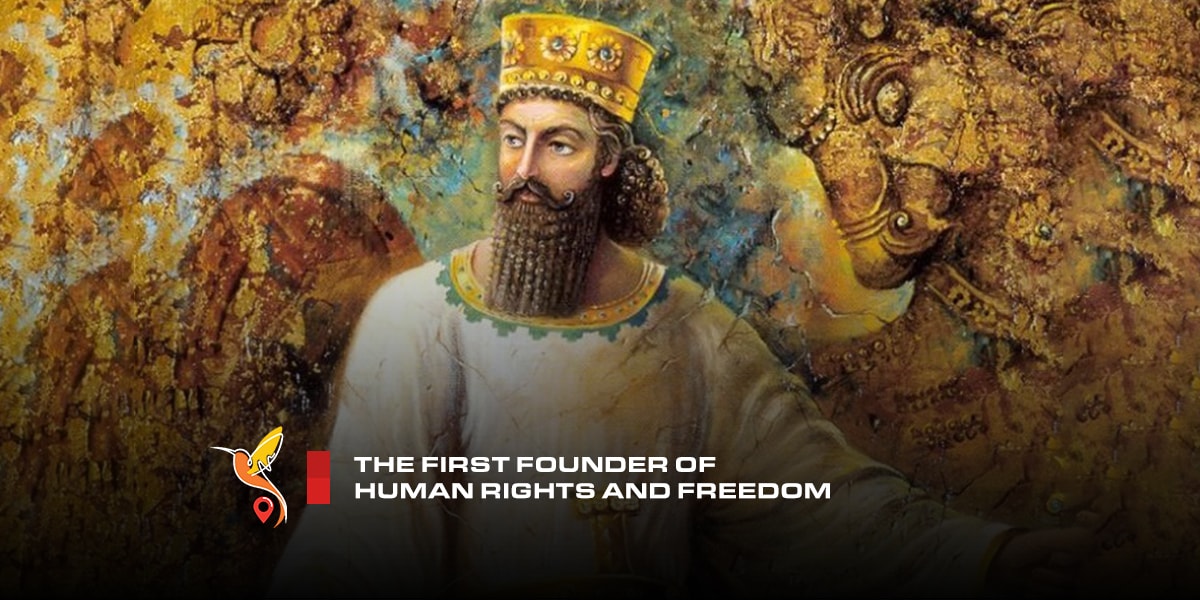 In the Persian year 1348 (1946 AD), 2507 years after the birth of the decree, representatives of various countries praised him as the first founder of human rights and human freedom. They did so by gathering around the tomb of Cyrus the Achaemenid in Pasargadae. Nowadays the Cyrus Cylinder is famous. It is the base of human rights all around the world.

Translation of the Charter of Human Rights

Sir Henry Rawlinson was the first person to translate the Cyrus cylinder human rights into English.
In the days when Cyrus the Great sent the Charter of Human Rights and Human Freedom, boasting of killing, burning, and destroying other people was the glory of the kings. The content of this charter is as follows:
“I am Cyrus, King of the World, The Great King, The Just King, King of Babylon, King of Sumer and Akkad, King of the World. Son of Cambyses, the Great King … When I entered Babylon without war and struggle, all the people accepted my steps with joy. On the throne of the kings of Babylon, I sat. I sat on the throne of Marduk, the Marduk (Babylonian God), turned the pure hearts of the people of Babylon to me because I honored him. My great army slowly entered Babylon. I did not allow the suffering of the people of this city and this land. I abolished slavery, ending their misery. … I commanded no one to overthrow the inhabitants of the city. I commanded that all people should be free to worship their god and that no one would need them. 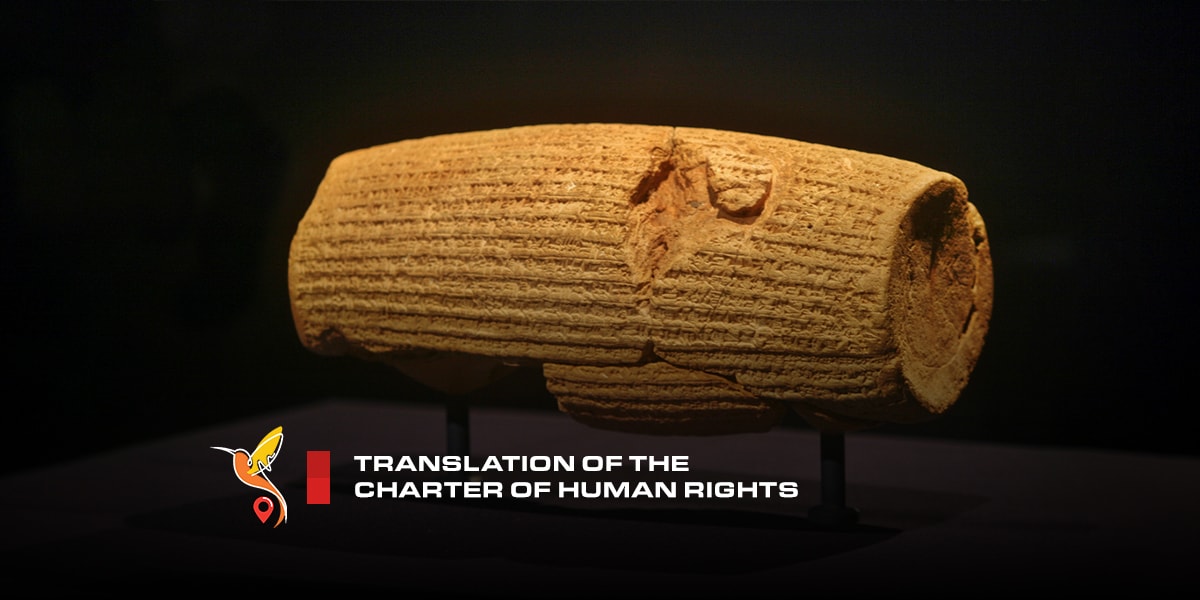 the text of the cyrus charter of human rights

The Great God was pleased with my deeds … He blessed us with his kindness. We all praised his high position in a joyful and peaceful way … I rebuilt all the cities that had been destroyed. I commanded to open all the shrines that had been closed. I returned all the people who were scattered and displaced to their homeland and built their ruined homes so that their hearts would rejoice and that I would be long-living in their prayers every day … I provided a peaceful community for all people, and I gave peace to all people. I respect all the traditions and religions of Babylon, Akkad, and other countries under my command. All people in the lands under my command are free to choose their religion, work, and place of residence. As long as I am alive, no one will be allowed to take over other property by force. I am not going to let anyone else do the work without getting paid. No one should be punished for a crime committed by his relatives. I will stop slavery of men and women, and I command my government to do so until this ugly tradition is removed from the earth. I will build the ruined cities beyond the Tigris and their places of worship so that their inhabitants, who were previously brought to Babylon as slaves, may return to their homes.”

The importance of the Cyrus Human Rights Charter

In the Achaemenid era, all people received the right to asylum. The case of Themistocles, who sought asylum in Ardeshir the Achaemenid kingdom, is an example of applying the principle of the careful observance of the right of asylum to foreigners. You can see this in the Universal Declaration of Human Rights, Article 14. “Everyone has the right to seek asylum in other countries and be free from persecution”. 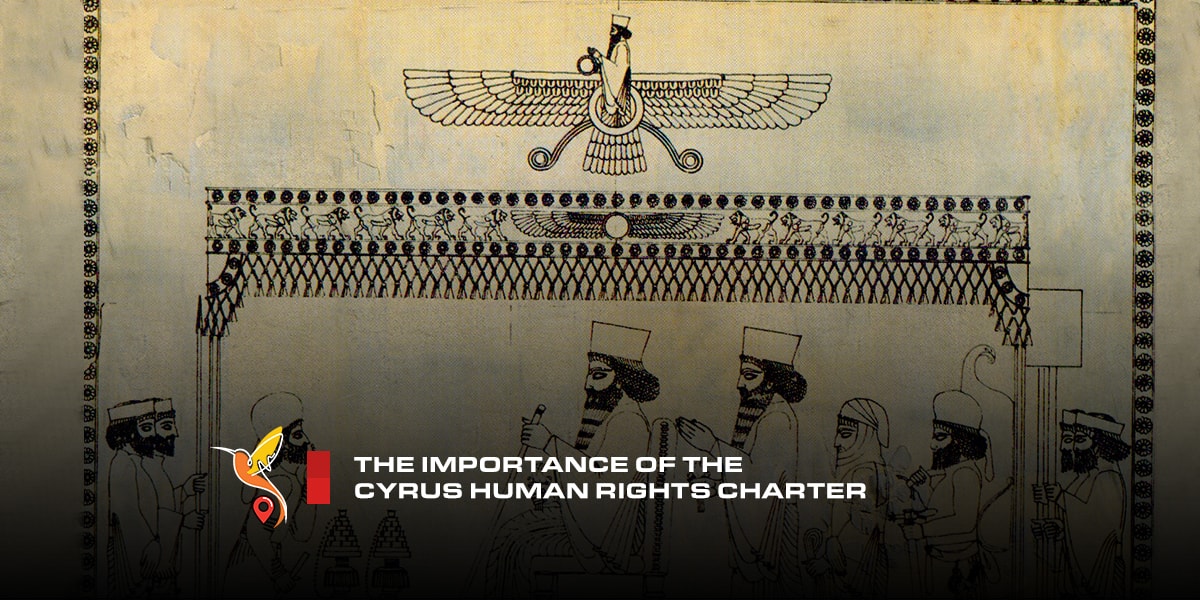 observence of social rights in individuals during the Cyrus era

The observance of the social rights of individuals is another example of the guarantee of innate human rights. It is also an instance of respect for human rights in this period, especially in the Cyrus Cylinder of human rights. Documents obtained from Persepolis refer to the tablets which we know as treasury tablets. In these tablets, compensation for workers who worked on the Imperial real estate is prominent. There were even special incentives such as maternity leave and jobs such as sewing workshops for men and women. In these jobs, women were directors. For centuries, the Universal Declaration of Human Rights has emphasized the fair conditions for an equitable and satisfactory workplace in which there are equal pay and equal rights for equal work.

On the map of Iran, Pasargadae is a gem. The ruins tell the story of a once-great nation under a great king. A great king whose greatness was not due to the killing of so many souls. Or ruling the economic conditions of his era. It was due to giving peace and freedom to other people. A great king who understood the fundamentals of humanity. A king who proved that it is possible to rule magnificently without shedding blood and disseminating fear.