Which season is the best to visit Iran?

Do Not Miss Sheikh Lotfollah Mosque In Isfahan 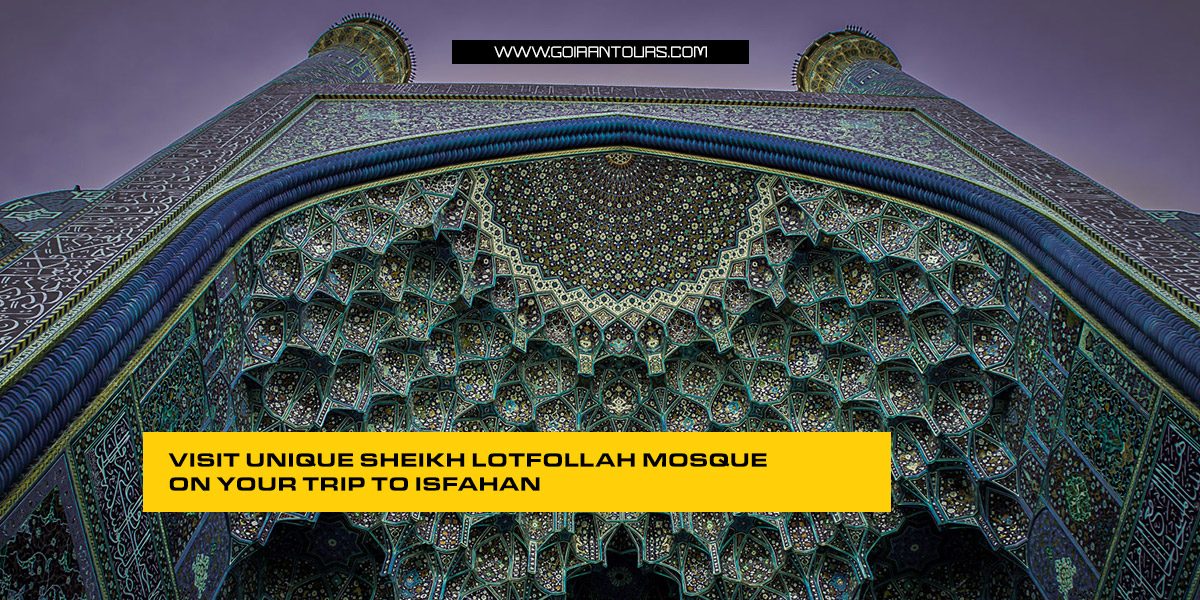 Visit Unique Sheikh Lotfollah Mosque on Your Trip to Isfahan

Visit the Unique Sheikh Lotfollah Mosque on Your Trip to Isfahan

Definitely one of the main destinations of Iran tours is Isfahan city which is considered as the capital of art and architecture. On every Isfahan travel guide, you will definitely find information on Sheikh Lotfollah Mosque. Visiting this mosque is a unique experience because of the rich history informing its background and the wonderful artistic effort put into its building process. Therefore, you will kill two birds with one stone visiting this marvelous piece of art. Let’s briefly look at why this place is so significant both to Iranian people and visitors from all over the world.

The History of Sheikh Lotfollah Mosque 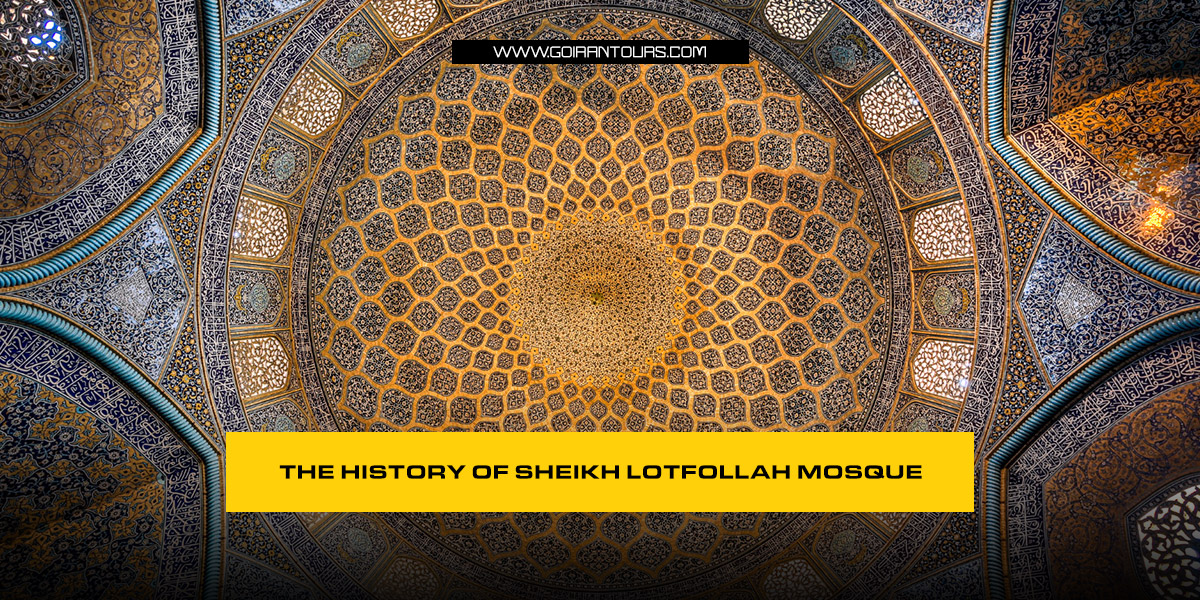 The History of Sheikh Lotfollah Mosque

Well, Sheikh Lotfollah Mosque is one of the architectural masterpieces of the Persian architecture. Shah Abbas the First, who was preoccupied by many sensitive issues at his time, ordered the most prominent artists of his time to build this place, which is also a symbolic representation of two of the most important concerns of his: The contrast of Shi’i Islam to Sunni Islam (a spiritual matter) and the resistance against the Ottoman Turks by the Persian. The mosque was built by the master architect Sheikh Bahai, who is considered to be one of the greatest figures of post-Islamic Iran. 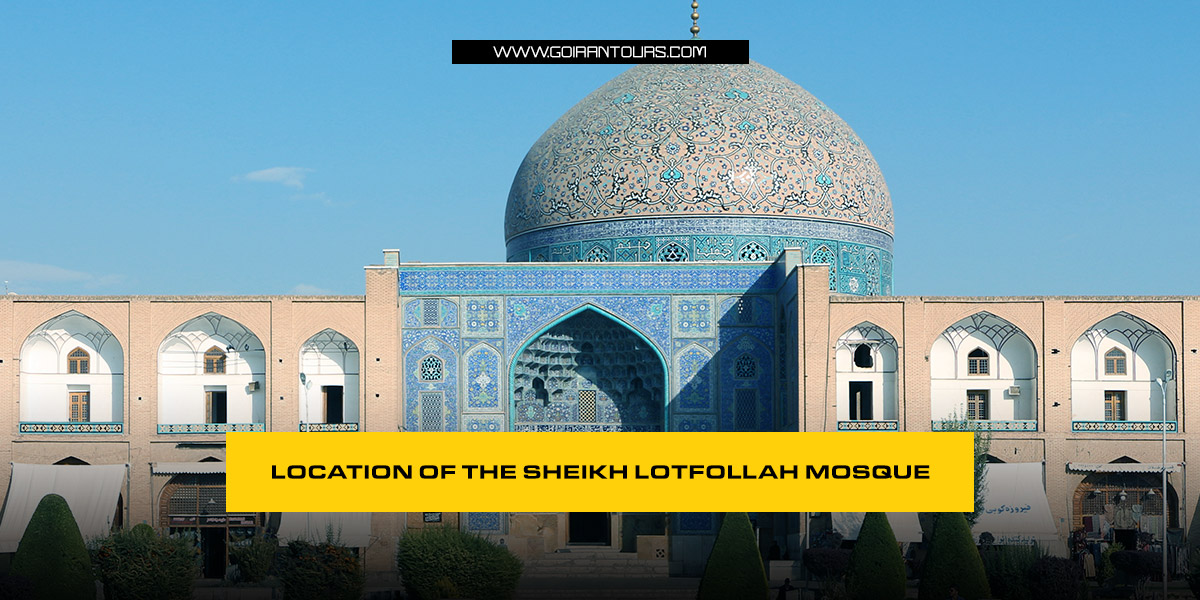 Location of the Sheikh Lotfollah Mosque

The mosque was designed and built during the Safavid Empire, and it is now located on the eastern side of Naqsh-e-Jahan Square in Isfahan. Amongst the four great monuments that surround the square and attract many tourists every year, it is highly recommended to visit Sheikh Lotfollah Mosque. Don’t worry if you think you might miss it, as almost all Isfahan travel guide include it as one of the must-sees in Isfahan.

What was the purpose of the Sheikh Lotfollah Mosque? 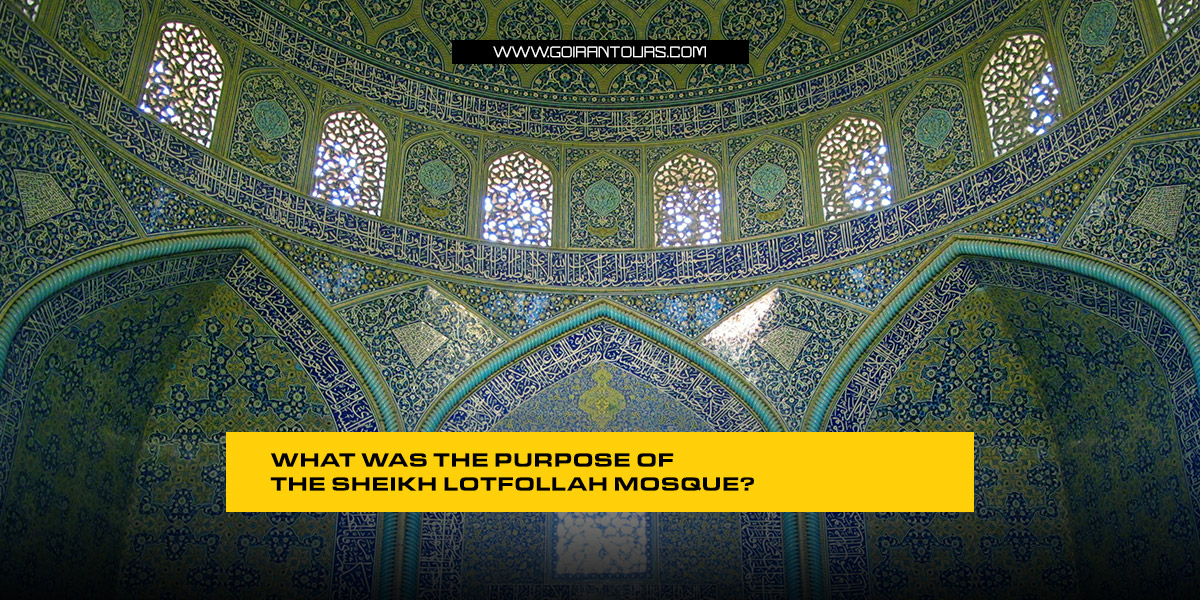 What was the purpose of the Sheikh Lotfollah Mosque?

Shah Abbas built the mosque, as historical facts show, to be used privately by the royal court. That’s why it doesn’t have any minarets and is also smaller than the Shah Mosque, which was primarily built for ordinary people. Centuries passed and the Safadivds faded away in the annals of history, and those mysterious doors were finally opened to the public. People from all walks of life could see and enjoy the awe-inspiring effort Sheikh Bahai and his workers, with Shah Abbas’ support, had put into building this masterpiece. The exquisite tile-work is a must-see for any tourist interested in Oriental tile-work. Even in Isfahan – a city home to masterpieces of tile-work, calligraphy, and mosaic work – this one is an outstanding work.

The Architecture of the Sheikh Lotfollah Mosque 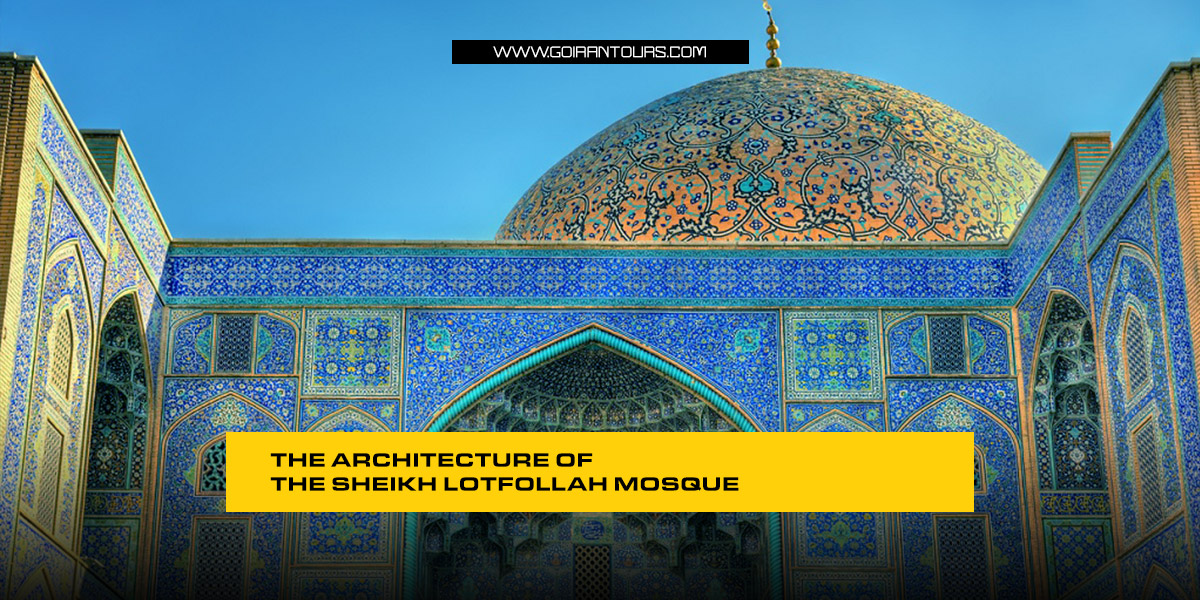 The Architecture of the Sheikh Lotfollah Mosque

A winding tunnel was built by order of the king for several reasons. One of the reasons was to make a shortcut across the square so that people didn’t have to walk a long way to arrive at the entrance. However, more importantly, upon entering the mosque, you would have to walk through a winding passage which would remind you of a spiral. Eventually, you arrived at the main building. But in doing so, you would have to pass lots of guards and sentries so Shah and all who were to use the building were sure no intruder could easily set foot in the building.  While, at the time, the doors of the building were always closed, today these doors are open to all who come to enjoy and visit Sheikh Lotfollah Mosque. The passage under the ground is no longer used, though. 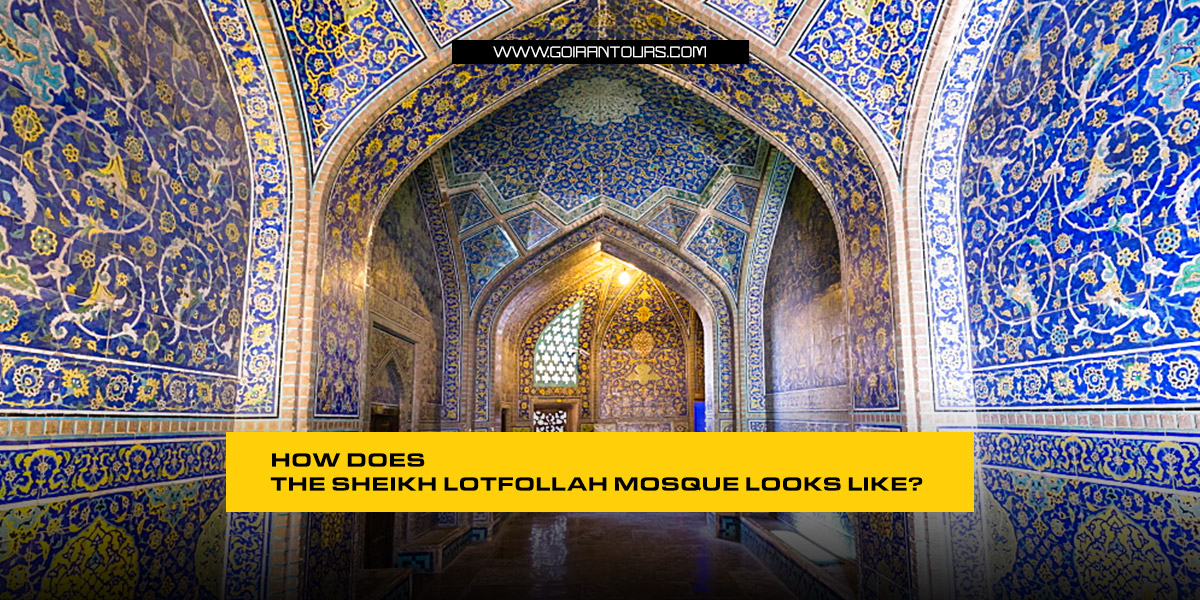 Now let’s see how the place looks like. As you approach the place, you’ll see a recessed half-moon which was built to serve as the entrance gateway. You can see many similar structures in Iran, for it is a primary feature of post-Islamic Iranian architecture. The gateway and the lower façade of the mosque were built from marble, while the polychrome mosaics and tiles beautify the upper parts of the gateway. Master calligrapher Ali Reza Abbasi supervised the process of calligraphy and tile-work, which is enchantingly beautiful today. At the time, the mosque was superior to all that was built in the Islamic world, which definitely adds to its value as a historical monument.

How do the inscriptions of the Sheikh Lotfollah Mosque reveal? 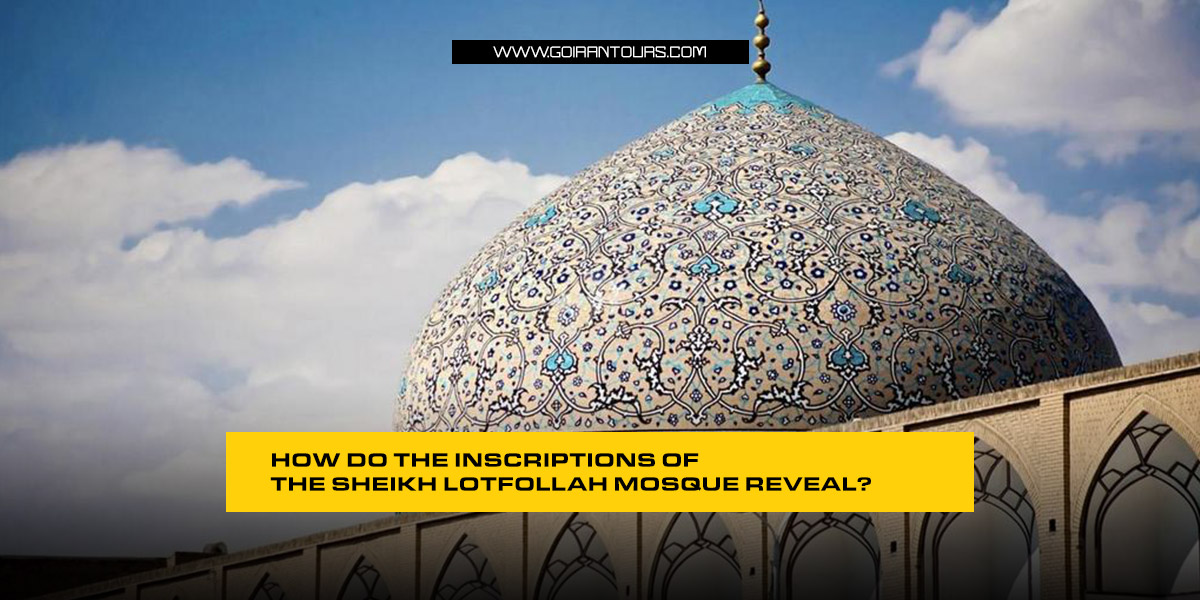 How do the inscriptions of the Sheikh Lotfollah Mosque reveal?

The inscriptions of the mosque reveal to us issues that were of huge importance to the king at the time. There is a lot to see at this place both from the outside and inside.

On the exterior drum of the dome, there is a running inscription in white tiles worked against a blue background. The inscription is the complete text of three chapters from the Holy Quran: The Sun, Man, and Abundance. These chapters put a lot of emphasis on having a pure soul and the doom in hell awaiting all those who deviate from God’s straightaway. The latter might have served as a reference to Ottoman Turks at the time.

While you visit Sheikh Lotfollah Mosque, you can see that interior walls are covered with colourful tiles in the main prayer chamber. On the walls, you can read Quranic verses and also poems from Sheikh Bahai. The names of the twelve Shi’i Imams are inscribed around the mihrab. The twelve Imams are of great significance to the Shiites, as they somehow differentiate them from the Sunnis.

Where to Stay near Sheikh Lotfollah Mosque? 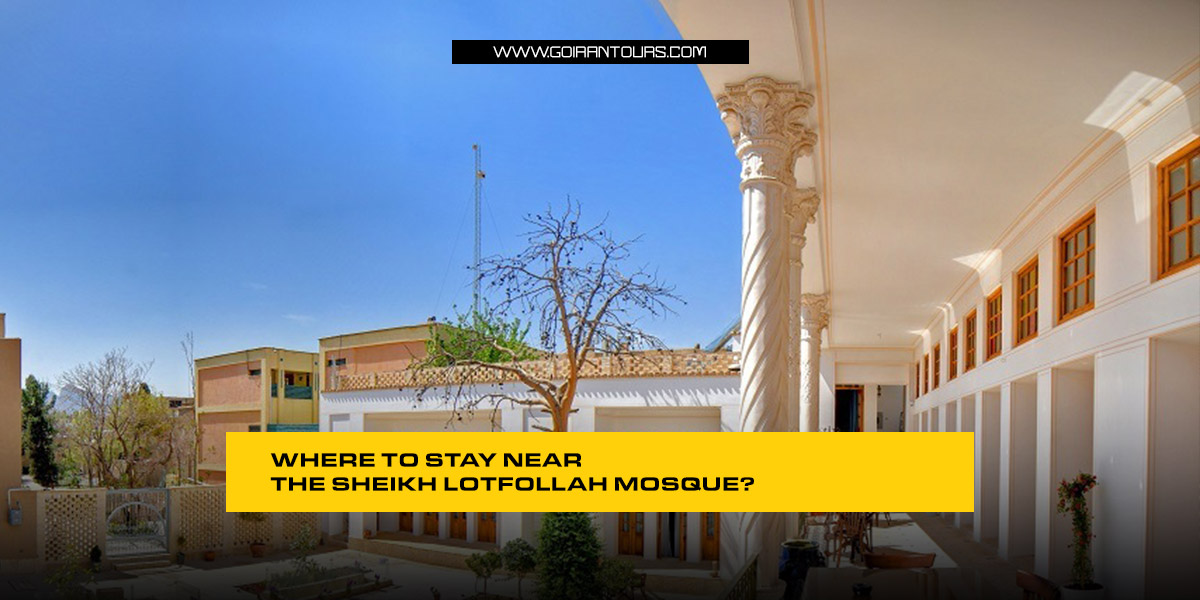 Where to stay near the Sheikh Lotfollah Mosque?

Ali Ghapou Hotel is located in the middle of the town, close to most of the attractions of Isfahan. It is also very close to the Mosque. There is also the Kowsar Hotel, which is a little further from the Mosque, but it is still close enough. Both hotels provide quality service and are affordable, with Parsian Kowsar hotel being a little more expensive.

Where to Eat near Sheikh Lotfollah Mosque? 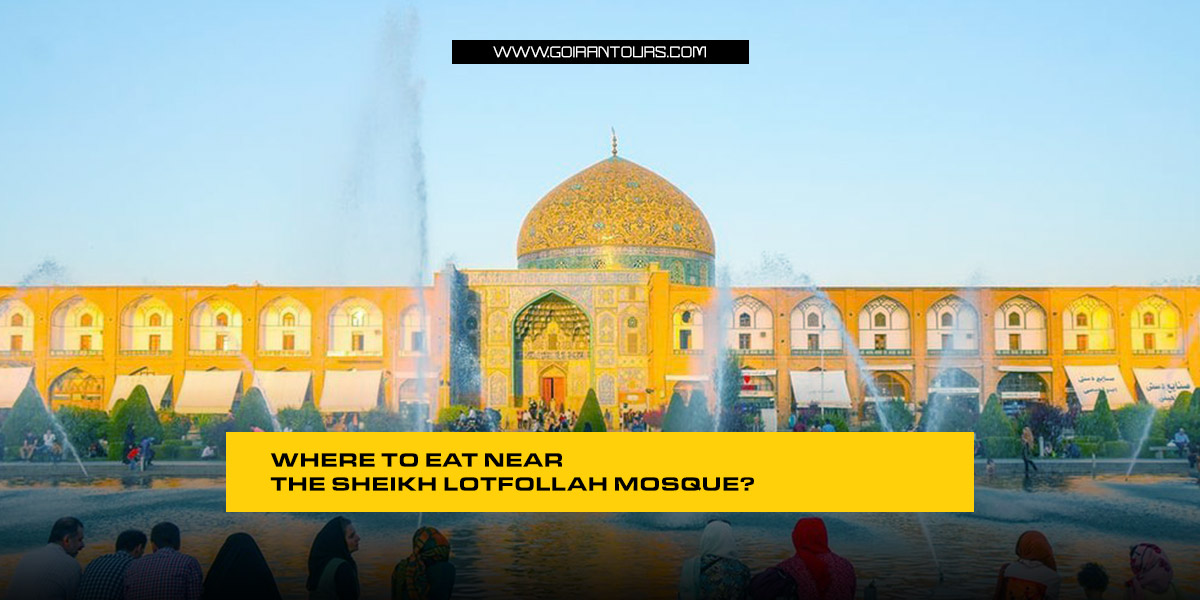 Where to eat near The Sheikh Lotfollah Mosque?

Behind Sheikh Lotfollah Mosque, a little further into the bazaar, you will find a corridor called Spadana. It is a delightful street with several antique shops and coffee shops all around. In the middle of the place, there is also a small pond and you can sit around it and have light snacks. Roozegar Café, one of the best cafes in Isfahan, is located here, right next to the Naghshe Jahan traditional restaurant.

The restaurant is often crowded, and it has both indoor seats and beautiful terraces, and as you sit, the dome of Sheikh Lotfollah Mosque is as close to you as if you’re sitting on its roof. The atmosphere is good around here and you can find most of the traditional Iranian food.

When to Visit Sheikh Lotfollah Mosque? 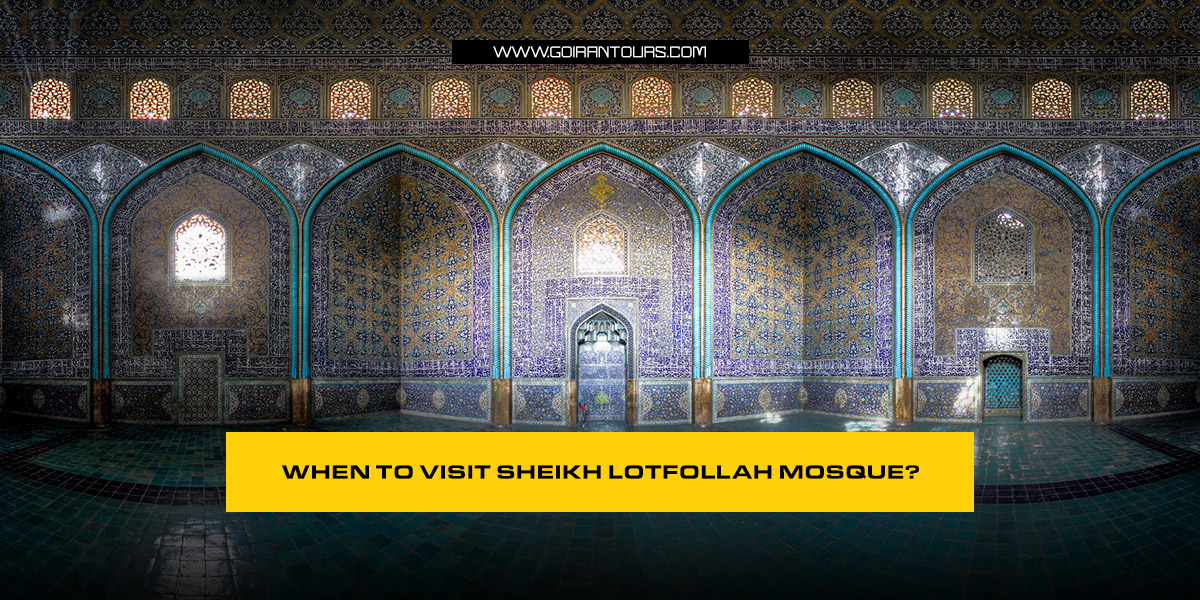 When to Visit Sheikh Lotfollah Mosque?

Evenings and nights are enchantingly beautiful here. While stars gradually appear in the vast sky backdrop of the Mosque, lights start to shine here and there, giving the whole place an air of religious antiquity and Persian originality. The hours when you can enter the mosque are 9 AM to 12.30 AM, and 2 to 6 PM. So if you want to enjoy the evening, you can plan your visit a little earlier so that you can visit the interiors without a rush.

Overall, it is highly recommended to visit Sheikh Lotfollah Mosque and get the unique experience of walking in this great example of Safavid art and culture. For getting more information, you can approach Isfahan travel guide. 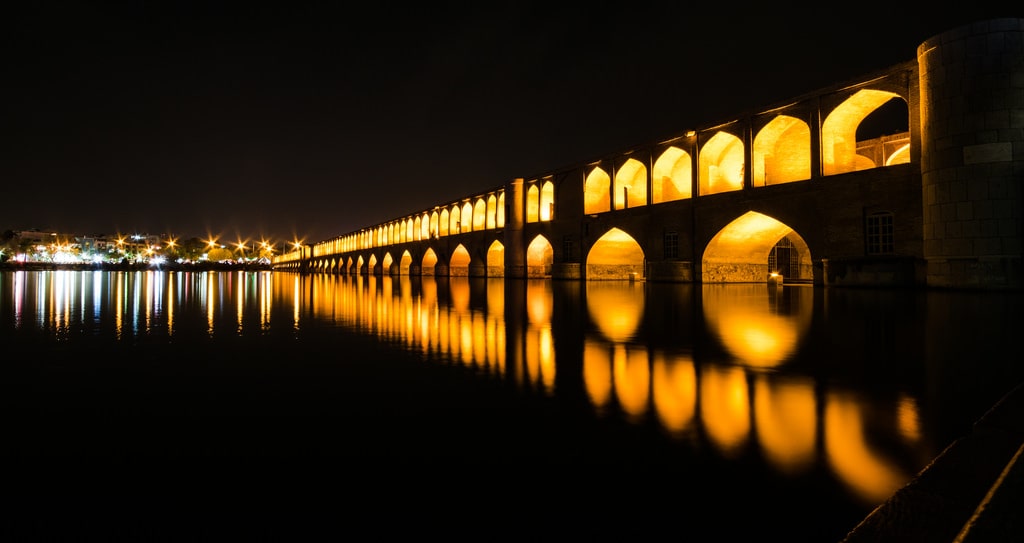