Do Not Miss Sheikh Lotfollah Mosque In Isfahan

A Trip to Shahzadeh Gardens Mahan 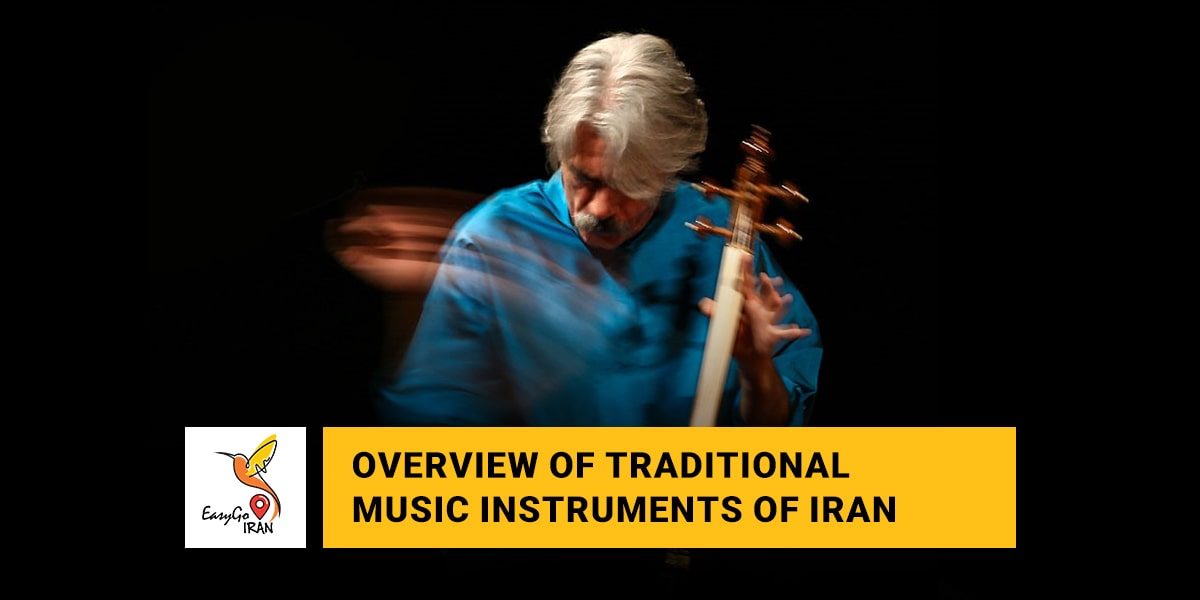 Traditional music instruments of Iran are amongst the most fascinating cultural artifacts to see and listen to. Iranian music is deeply tied to the Persian mystic soul of Iranian culture. The listener can never forget the tunes he/she hears. As the famous saying goes, any song played with Iranian instruments will be heard not only with one’s ears but with one’s heart. In this brief article, we have attempted to introduce a few of the best traditional music instruments of Iran. Although whenever you travel to Iran, as your tailor-made tours Iran you can participate in Iran cultural tour to find out more about them and the city where they have risen.

One of the oldest Iranian musical instruments, the santur is played with two highly light-weighted mallets that are held between the thumbs and index fingers. The santur is very popular amongst Iranian people, and its tunes evoke a sense of oriental peace and tranquility in the audience. 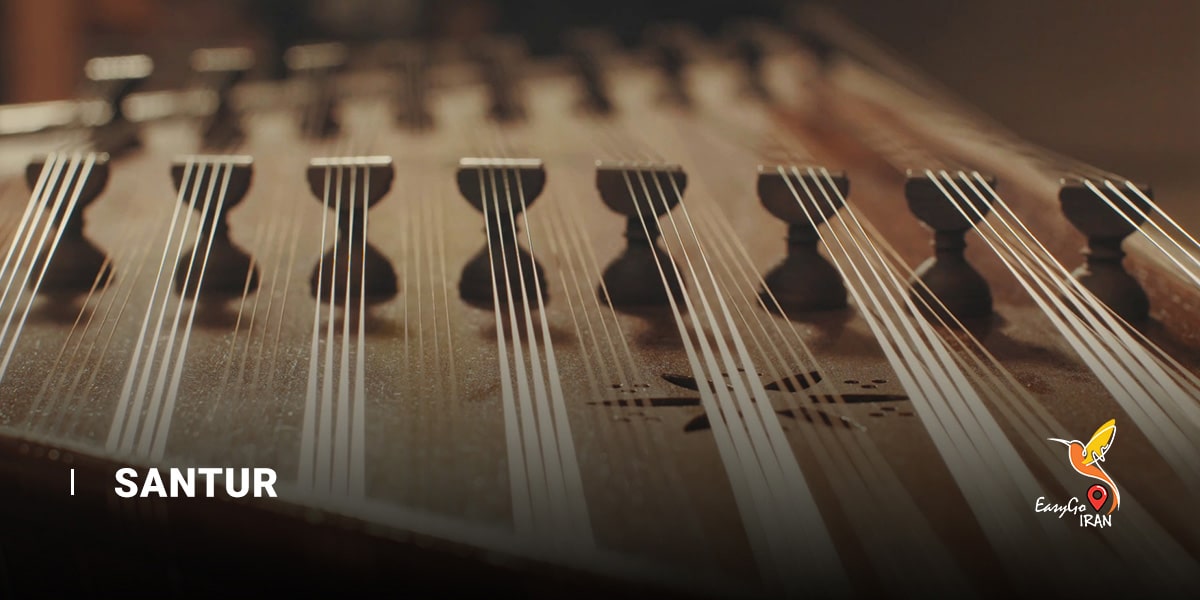 The History of Santur 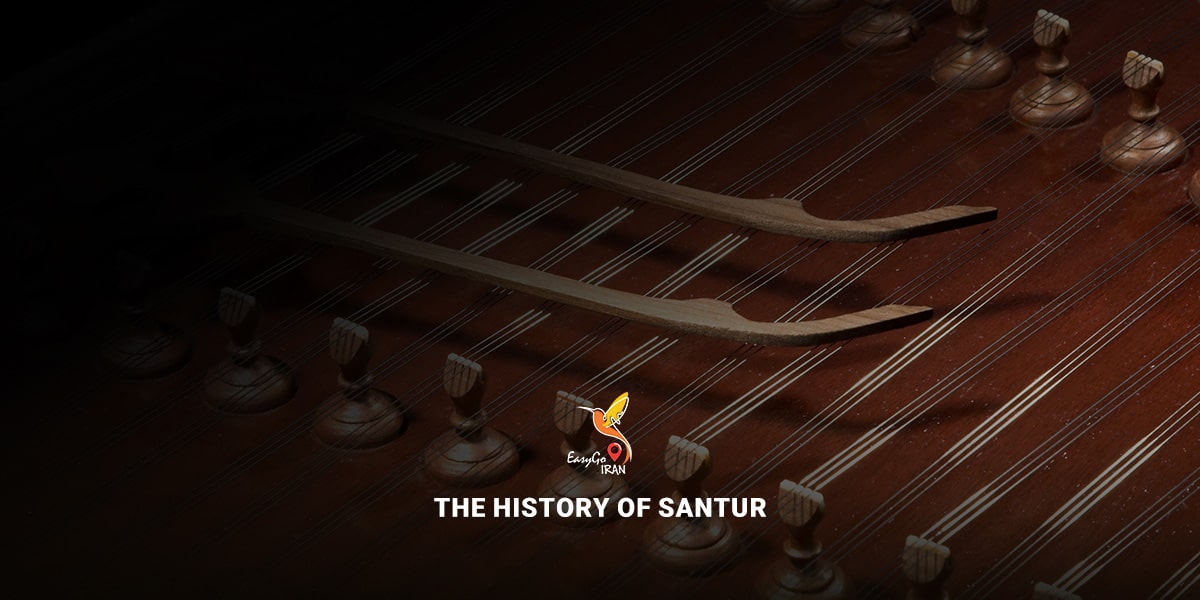 The History of Santur

The santur is a hammered dulcimer which was invented and developed in Iran and Mesopotamia. Musicians of old times took it to other parts of the Middle East and each country modified it by adding something to it. A regular Iranian santur comes with two sets of nine bridges and gives the musician a range of three octaves.

The structure of Santur

The makers use brass, copper, and steel to make the strings. To be more precise, those strings that are on the right are made of brass and copper. The others that are on the left are made of steel. The santur has three positions and 18 bridges. Four strings cross over each bridge. The musician is able to tune the Persian santur to a range of different diatonic scales through 1/4 tones which are named according to 12 modes (dastgahs) of Iranian music. 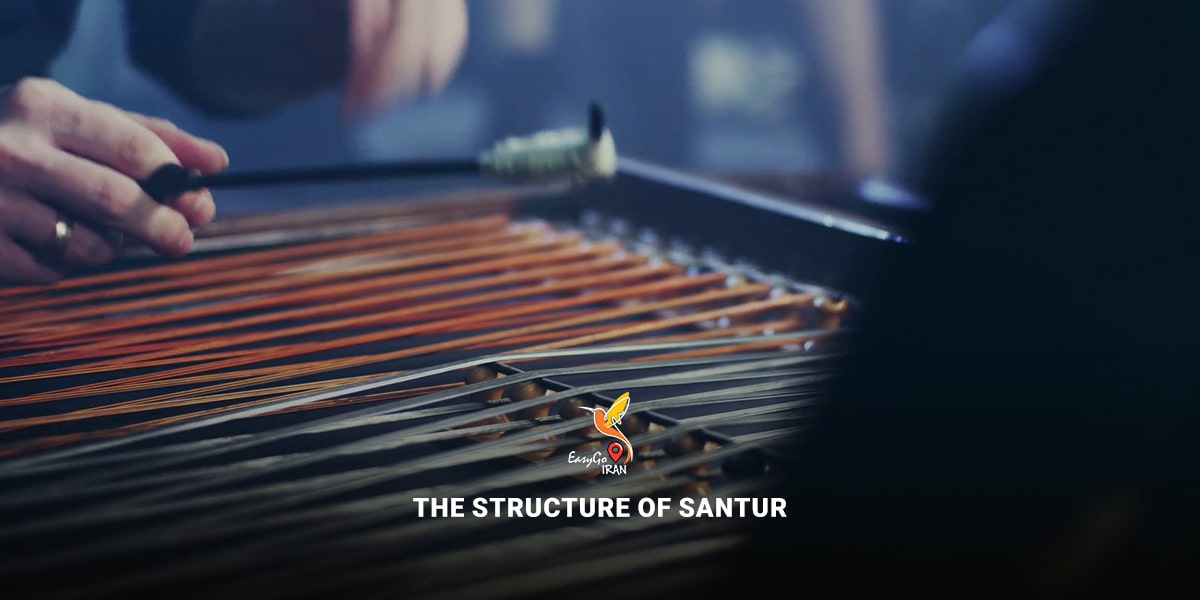 In Iran, many prominent santur players shaped the rich history of Persian classical music and many continue to do so. Among them were Abol Hassan Saba, Parviz Meshkatian, and Faramarz Payvar. Among today’s players are Manoochehr Sadeghi and Nasser Rastegar Nejad. The santur is played all over Iran. 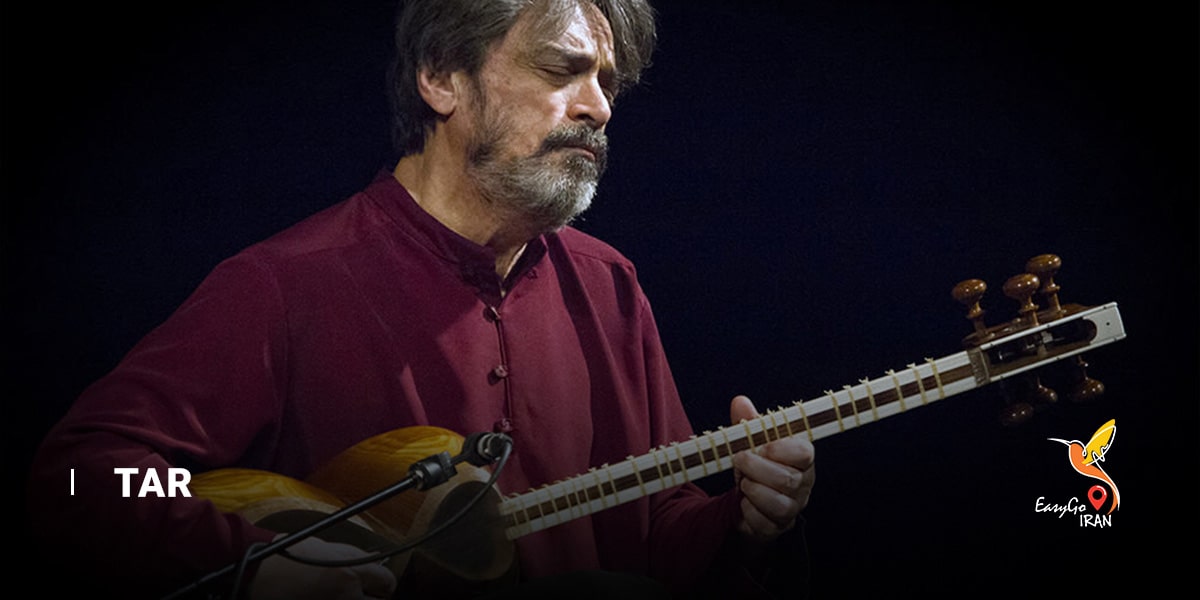 The tar is an Iranian instrument, but musicians of many countries and cultures around Iran play it. It is a stringed instrument which was called, in the old days, Chartar (four strings) due to the fact that it really has four strings. Tar was considered to have therapeutic effects such as treating stress on the listener. It evokes a sense of transcendence beyond the mundane life making the listener ponder upon the meaning of life.

The structure of Tar 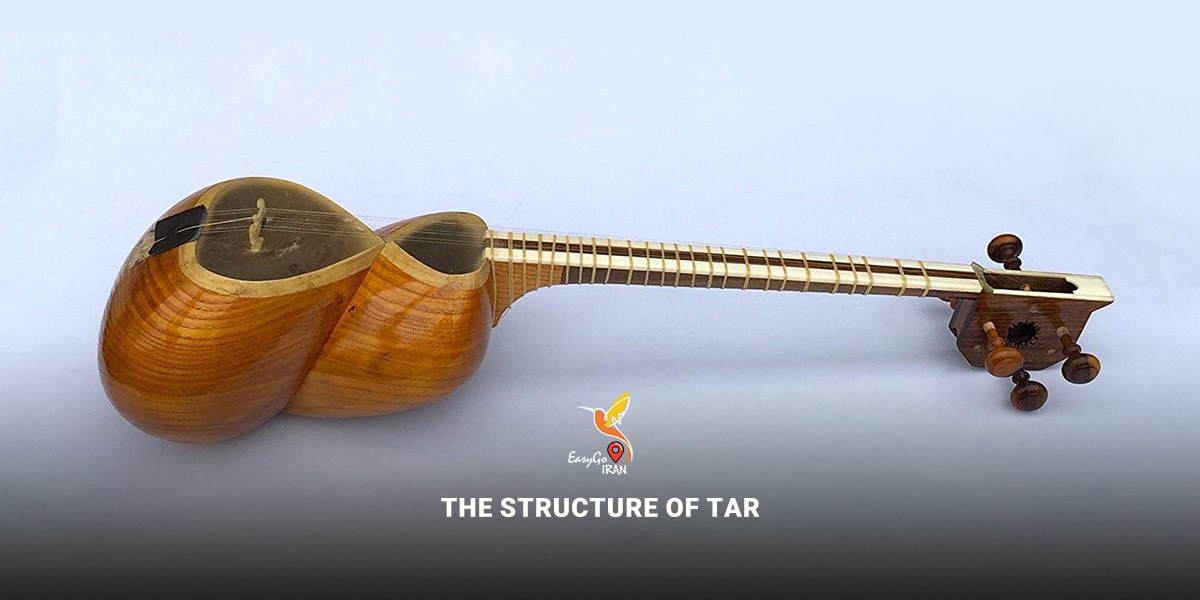 The Structure of Tar

There are twenty-five to twenty-eight adjustable gut frets on the fingerboard. The tar also has three double courses of strings. Musicians who are familiar with tar know that it has a range of almost two and a half octaves. 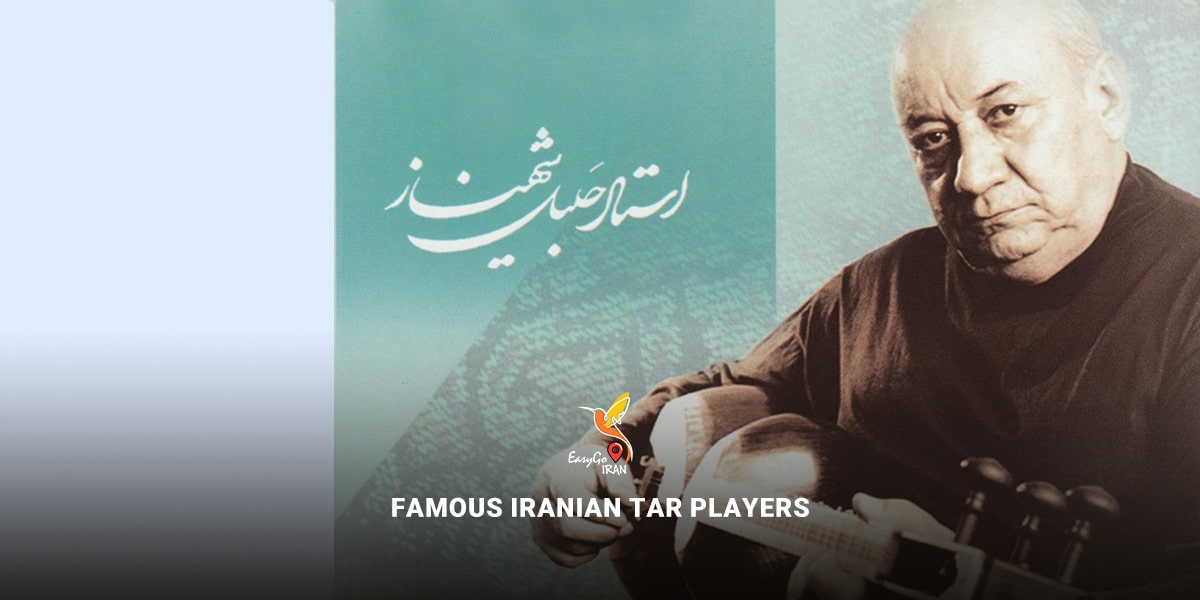 Some people play it with a small brass plectrum, while many others use just their nails. The tar is very popular in Azerbaijan. The prominent tar players in Iran are Mirza Abdollah and Hossein Alizadeh.

3.The History of Dotar

The Dotar has two strings, as the name suggests, and is much older than tar. It was mostly played by shepherds almost six centuries ago, and the warm tone filled the loneliness with the deserts and mountains they lived in. It is now played in a variety of Asian cultures, mostly around the central parts of Asia. 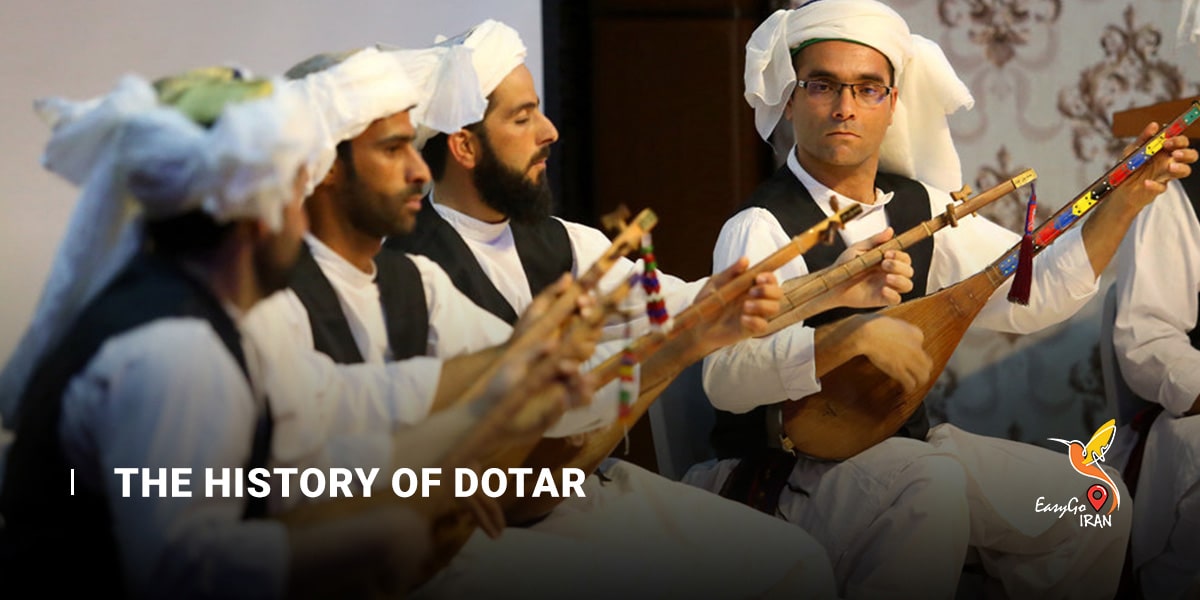 The History of Dotar

The Structure of Dotar 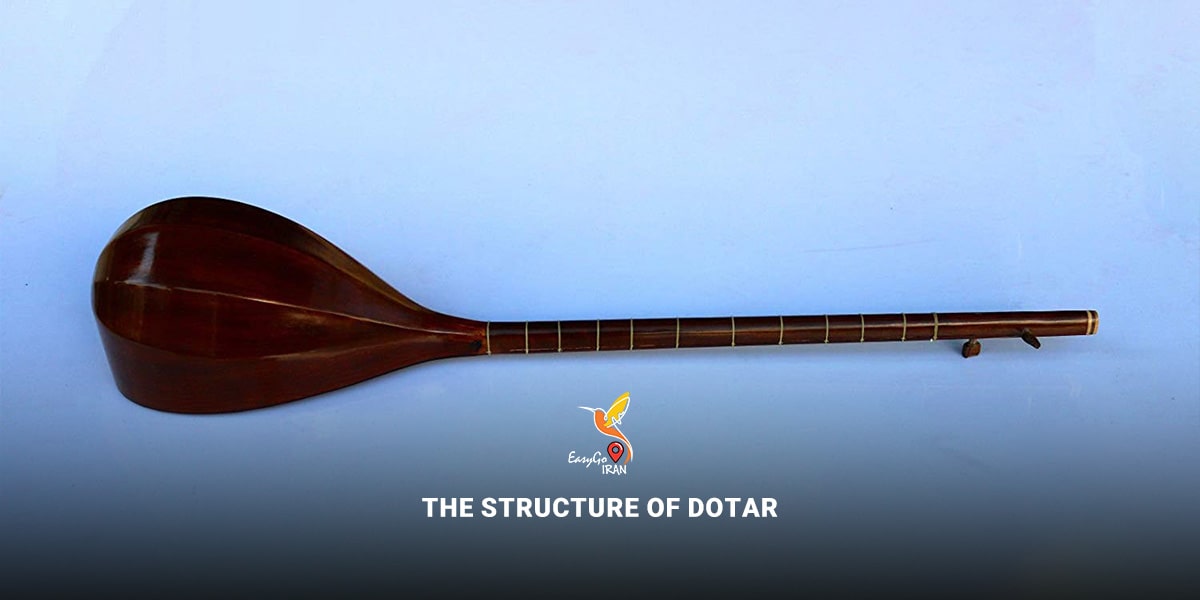 The Structure of Dotar

The makers used to make it with silk strings and some instruments still have them. But nowadays you can mostly see nylon strings. In Iran, the Dotar is common among Khorasani and Turkmen people. 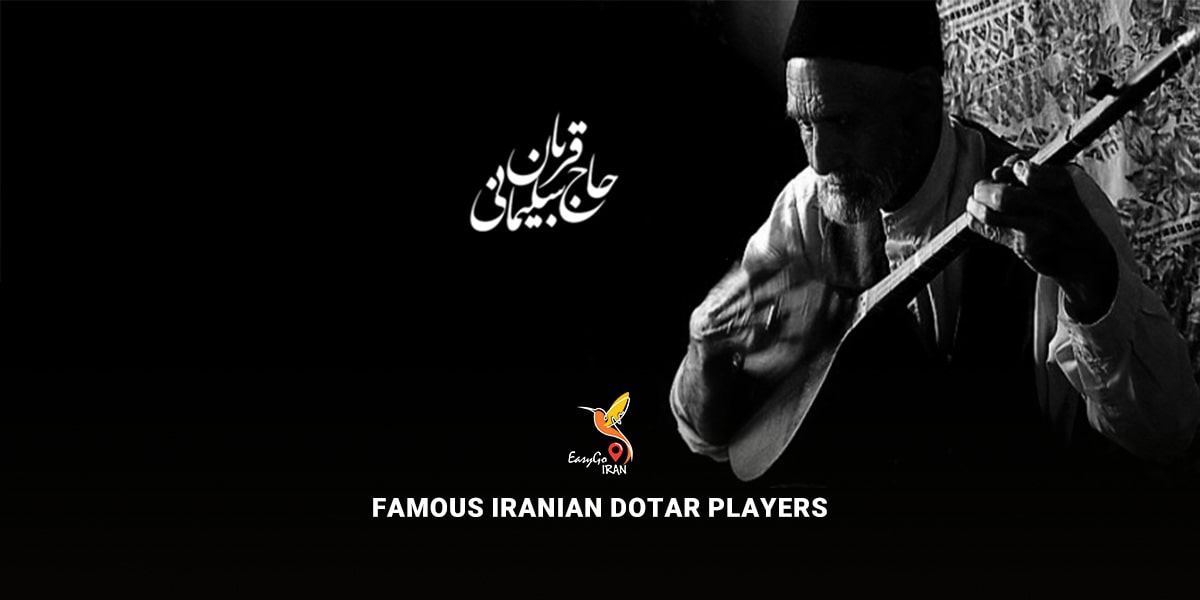 Haj Ghorban Soleimani was one of the prominent players of the Dotar, whose style remains still difficult to imitate. Saied Tehranizadeh is another well-known player in Iran. 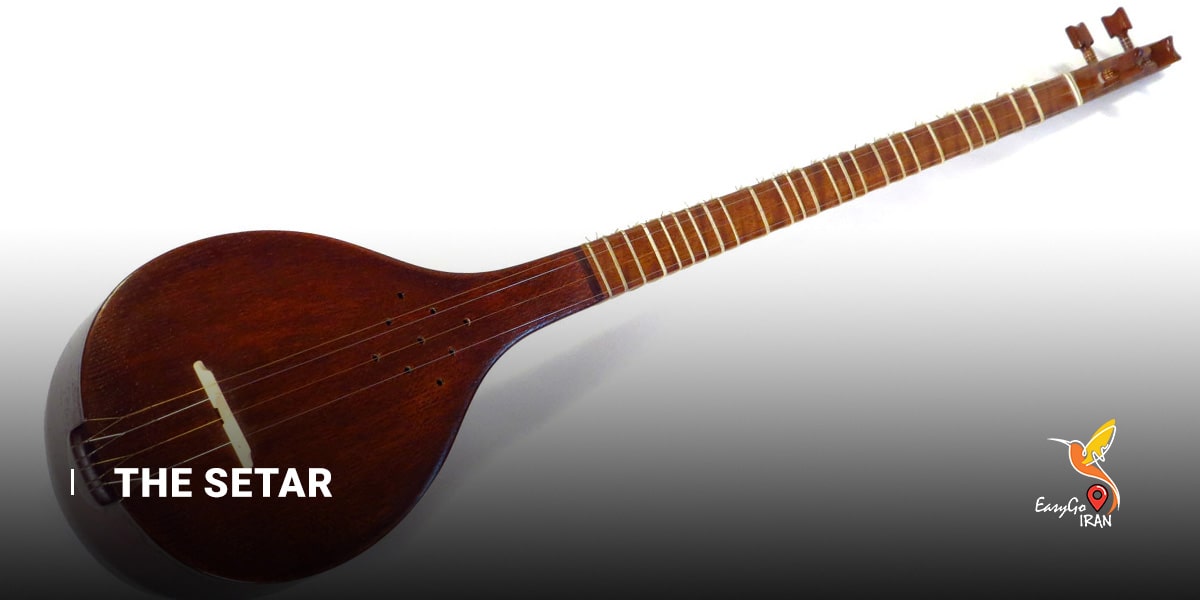 You might have seen this one. Almost the most popular among traditional music instruments of Iran, the setar originally had three strings. The setar has a melancholic tone appealing to the authentic soul of Iranian traditional music. That might be the reason why it’s used to accompany singers who sing mostly of regret, grief, and lost love.

The structure of Setar

The Setar has twenty-five to twenty-eight moveable frets. Most of the time, animal intestines are the materials used to make the strings. However, in the past, the makers used silk to make the strings. The Setar covers more than two and a half scales. Tuning of the Setar includes these modes: Shoor, Homayun, Mahoor, and Rast Panjgah. 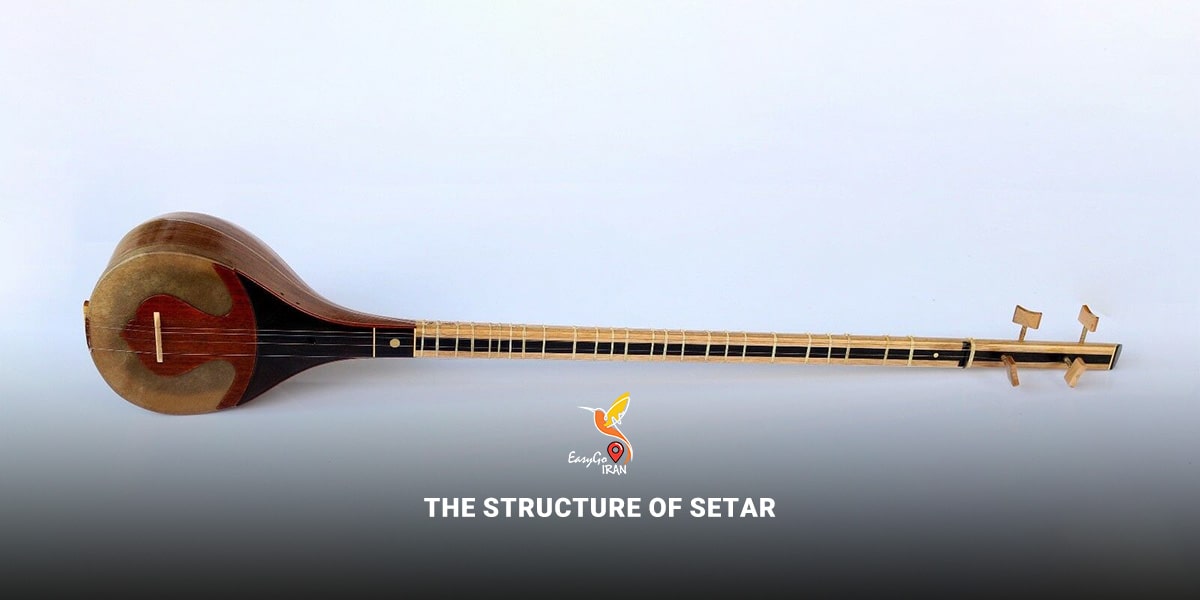 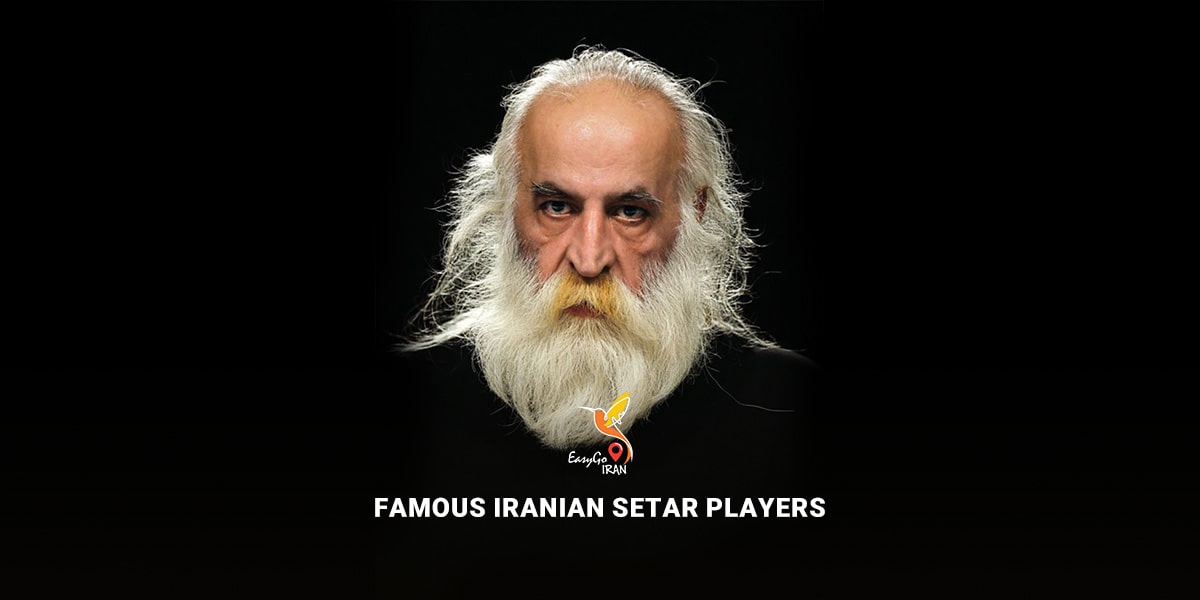 Some notable players of the Setar are Abolhassan Saba, Hossein Alizadeh, Mohammadreza Lotfi, and Keyhan Kalhor.  The Setar is one of the commonest instruments in Iran, and musicians from almost every city play it. But it is slightly more common in Isfahan and Khorasan.

5.The History of Oud 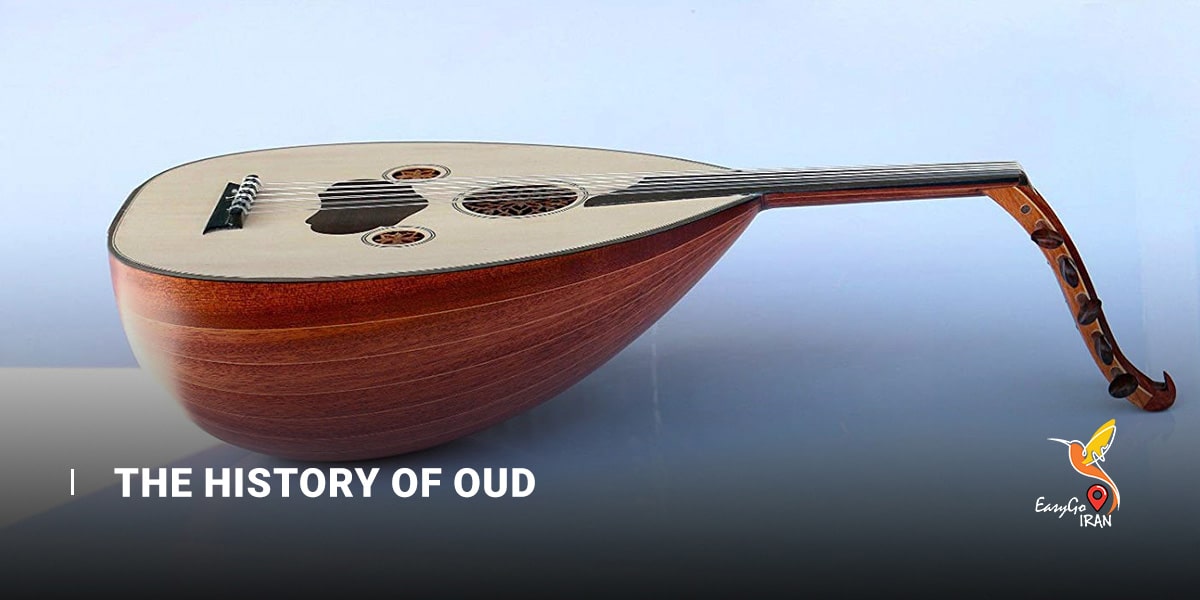 The History of Oud

The oud is not originally Iranian, but it’s derived from the Persian Barbat and has been gradually absorbed into Iranian culture. It is widely played throughout Asia and is mostly used in happy, warm tones. The oud is amongst the oldest instruments played in Asia, with evidence witnessing to its widespread popularity going back to two thousand years ago.

The sound of Oud 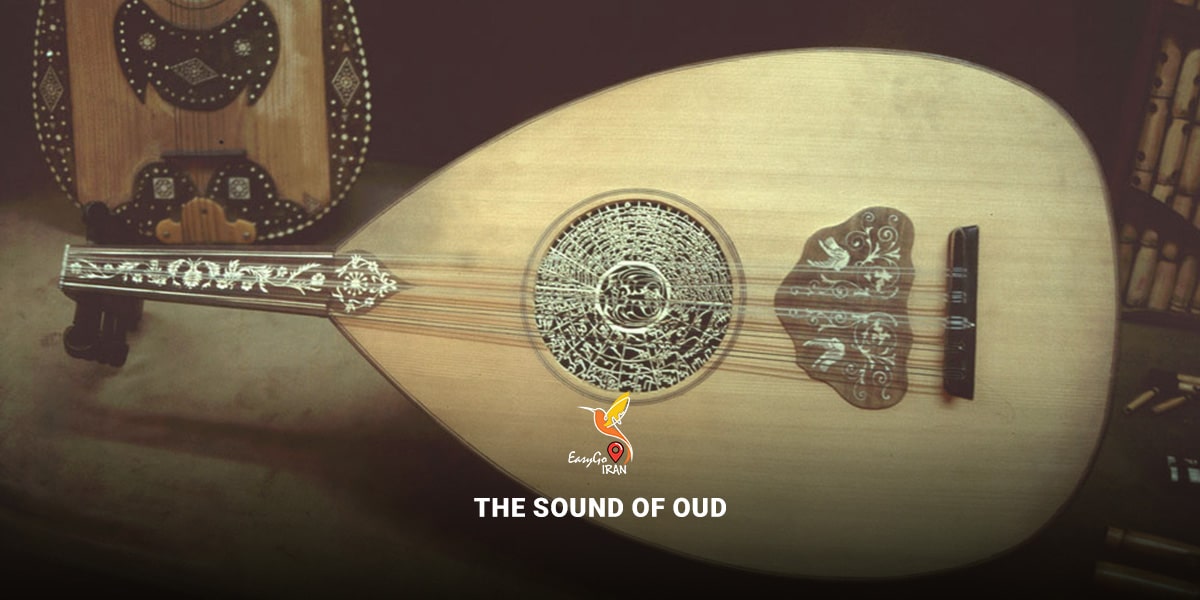 The Sound of Oud

The oud has a pear-shaped body structure and the fingerboard is relatively short. Its sound is low-pitched and deep. Nowadays, the oud is much less common in Iran compared to the past. Majid Nazempour is one of the prominent oud players in Iran.

6.The History of Tanbur 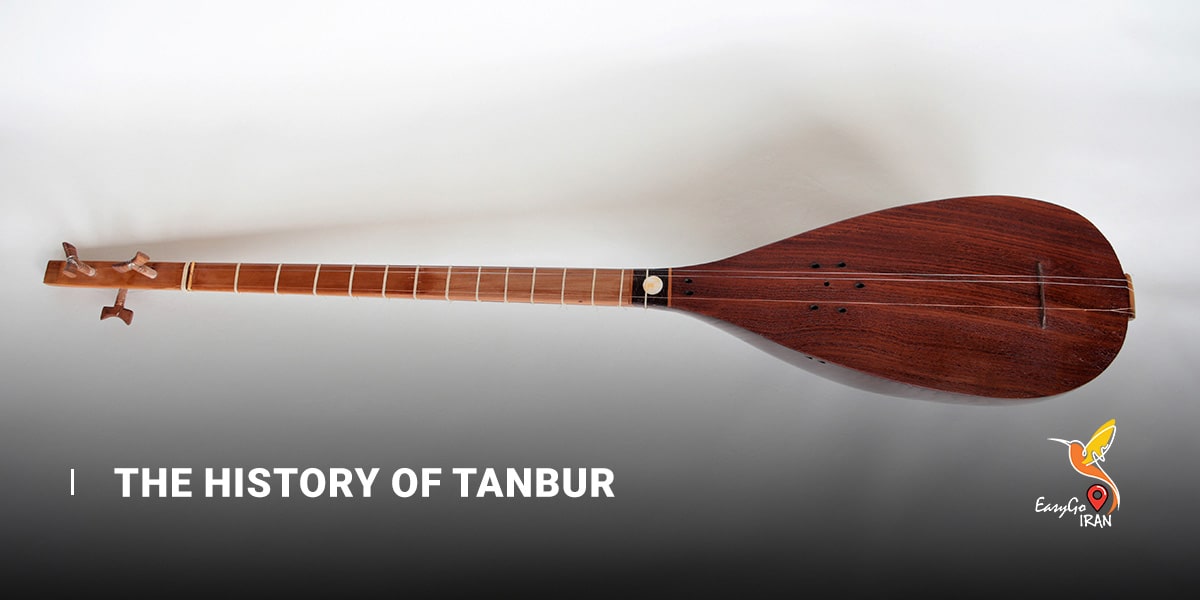 The History of Tanbur

The Tanbur has many varieties of Asia. The Iranian Tanbur is originally designed and made in Kermanshah. Almost everybody in Kermanshah can play the Tanbur. It is considered to be a sacred instrument and is used in local, traditional rituals.

The structure of Tanbur

Tanbur has a very melancholic tone which fills the audience with a sense of nostalgia and longing for the past. The Tanbur’s length is 90 cm and it is 16 cm in width. The main body is pear-shaped and there are two types of bodies: either a single piece or multiple carvels. 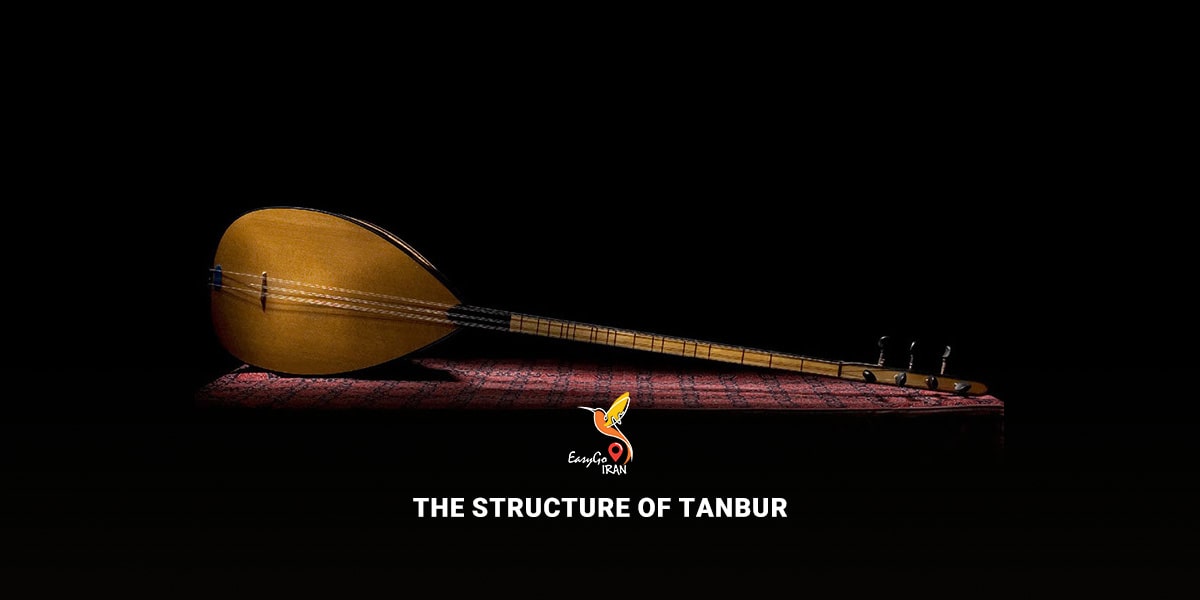 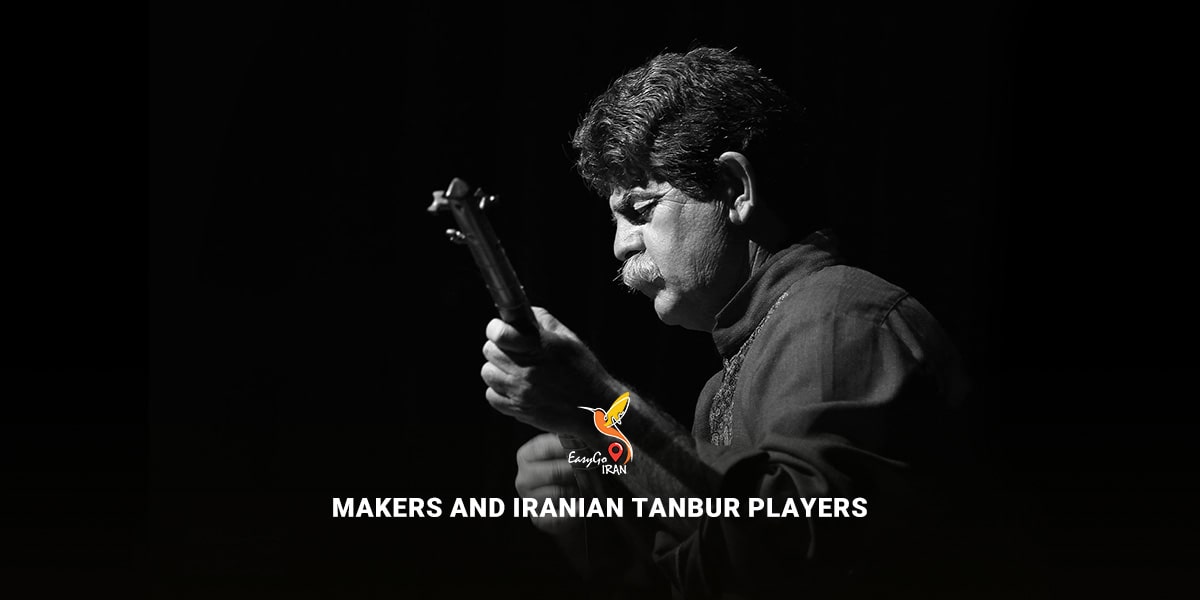 The makers mainly use walnut wood to make the Tanbur. It has 13 or 14 frets. The interesting thing about it is that this instrument is not microtonal, which is not very common among middle eastern instruments. Ali Akbar Moradi and Sohrab Pournazeri are among the notable players of the Tanbur.

7.The History of Ney 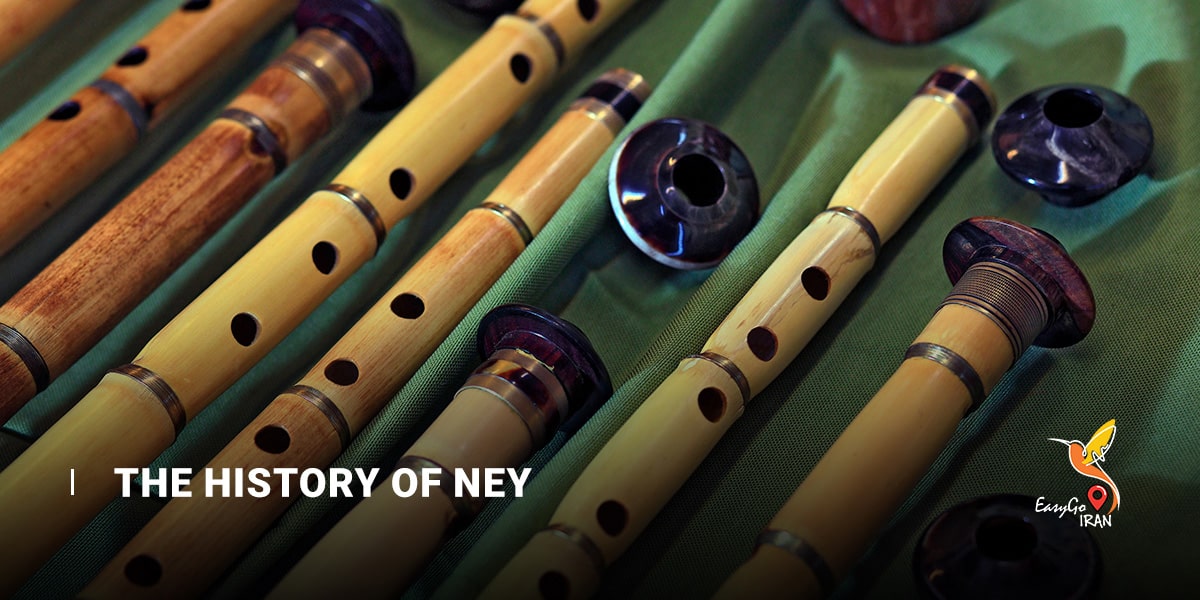 The History of Ney

The Ney is a kind of flute with finger holes. The instrument is very old and one of the most symbolically significant instruments in Iranian culture and literature. The Ney has been personified by many poets, the most prominent of whom being Rumi, to represent the man being completely surrendered to the will of God, and longing to return to Him.

The structure of Ney

The Persian Ney is made of a hollow cylinder and has finger-holes and can produce a range of tones, both high and low pitch. Sometimes, you can see a brass or plastic mouthpiece at the top. Its purpose is to protect the wood. It also gives the player a sharper edge for blowing. A skilled player can reach more than three octaves, but it is common to have some helpers for higher octaves. 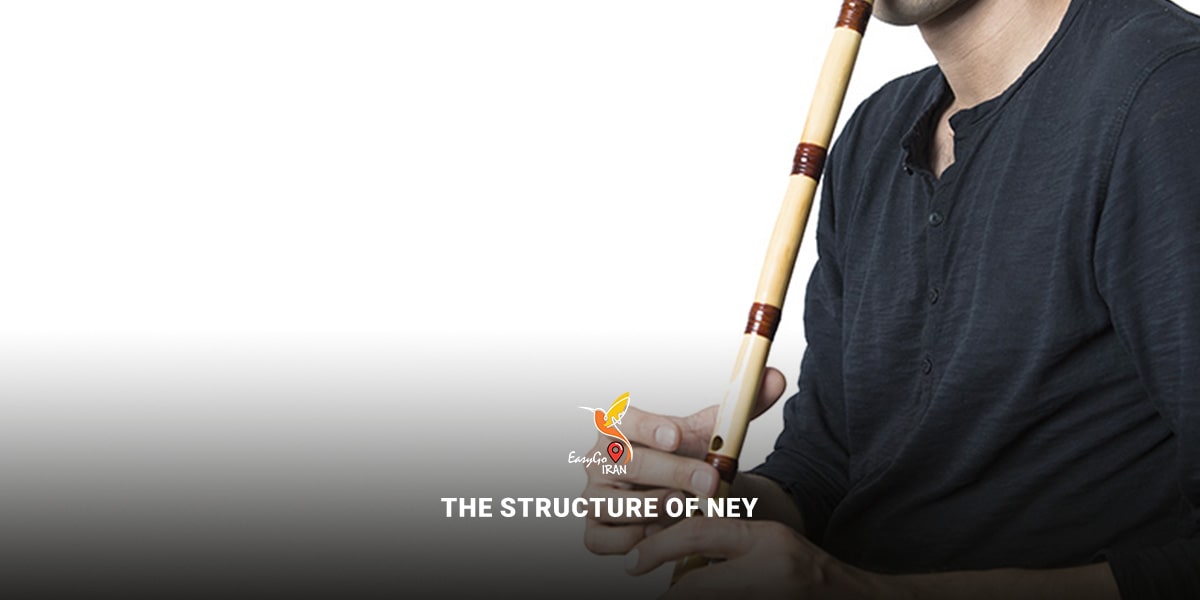 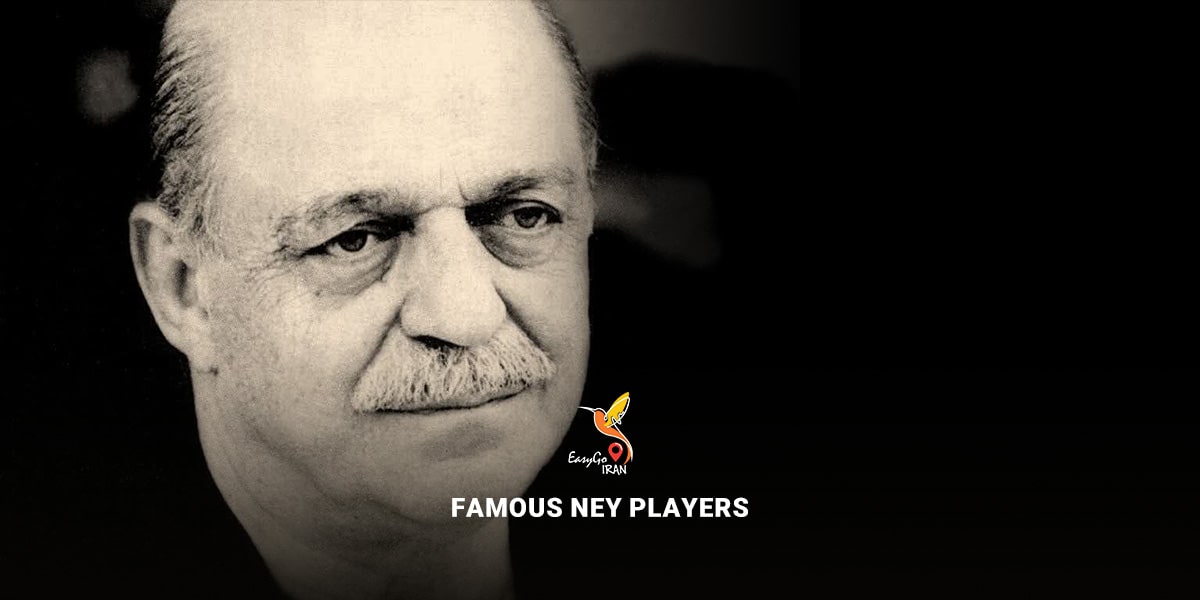 The Ney is common among Azari people in Iran, but it’s not limited to them. Notable players are Kianinejad and Hassan Nahid.

8.The History of Tonbak 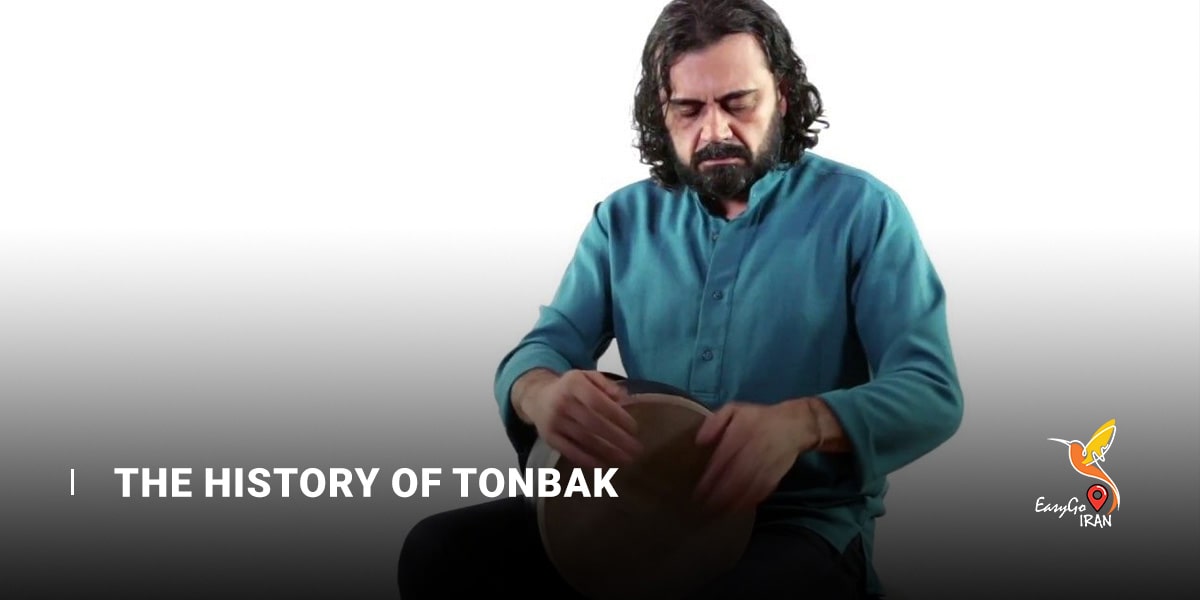 The History of Tonbak

The Tonbak is a traditional drum common since ancient Persia. The Tonbak is the main Iranian percussion instruments. Tunes played with Tonbak evoke a sense of excitement and happiness in the listener. It used to be played in Zourkhunehs (Iranian traditional gym) along with singing of the heroes of religious history and literary myths. Zourkhunehs are rarely found in Iran nowadays, but the few remaining ones are still filled with the epic melodies and songs, and definitely worth visiting while on an Iran cultural tour. The Tonbak is common in both the southern and northern parts of Iran.

9.The History of Daf 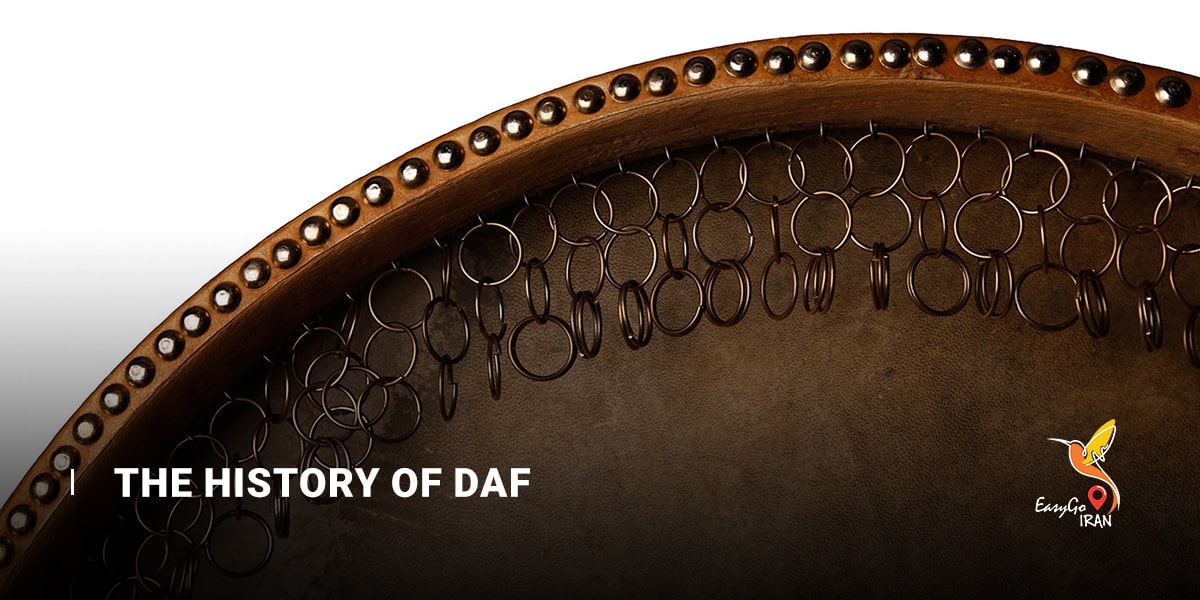 The History of Daf

The Daf is as one of the traditional music instruments of Iran is a Kurdish drum with its roots going back to a hundred years ago. It occupies a significant place in Iranian music, for the Daf is really able to be played along with all the other instruments.

The structure of Daf 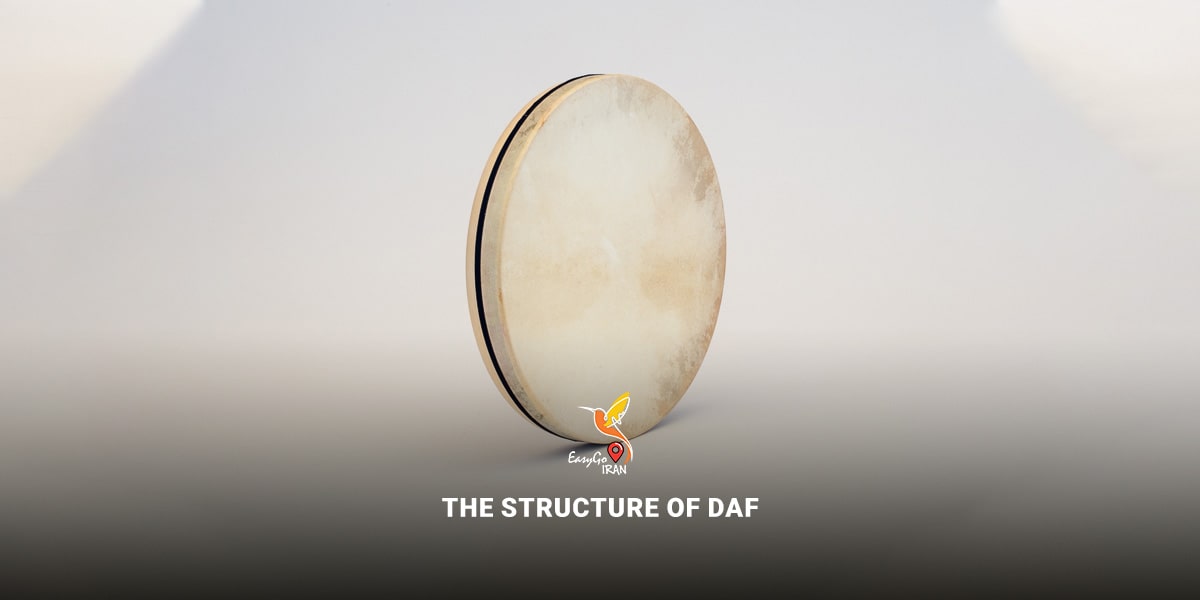 The Structure of Daf

The daf has a wooden frame. On the frame, the makers used mostly fish skin and ringlets attached to the sides. The daf has a magical sound, enabling the musician to evoke all kinds of feelings in the listener. It is also useful when a group of musicians tries to keep the rhythm of their music. It is mostly played in Kurdish regions, but it is also common in Isfahan and Shiraz.

While you are on travel to Iran, make sure you listen to some Iranian music, especially which use traditional music instruments of Iran, in every city you visit. Iranian music will never leave your heart, for it belongs to the deepest human longings of the entire human history. Moreover, it is still untouched and has a sense of coming from the past even to the foreign listener.  You can also ask locals to play and sing for you, which is always answered to in an enthusiastic way. 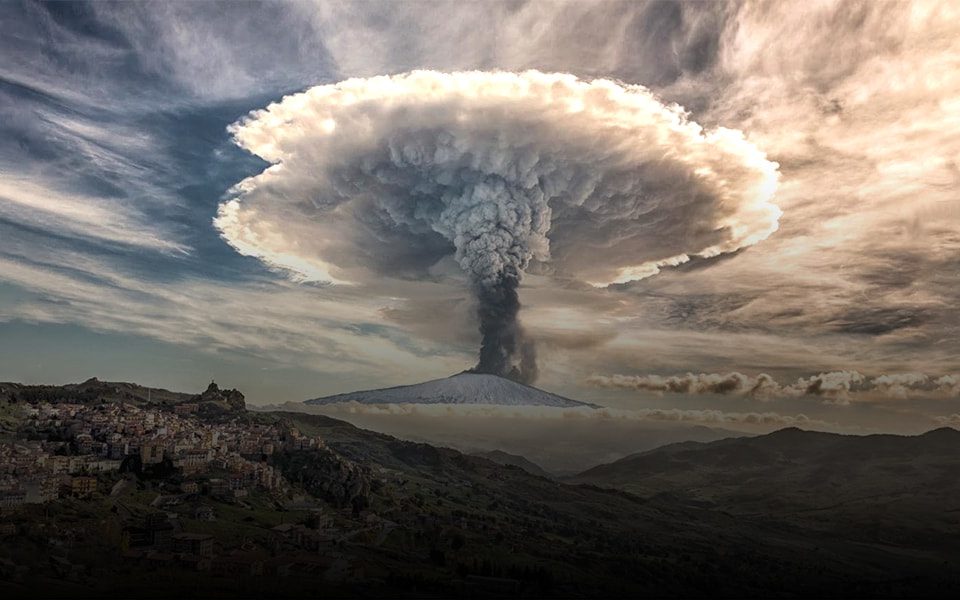 Overview of volcanoes peaks in Iran

Cross the volcanoes peaks in Iran 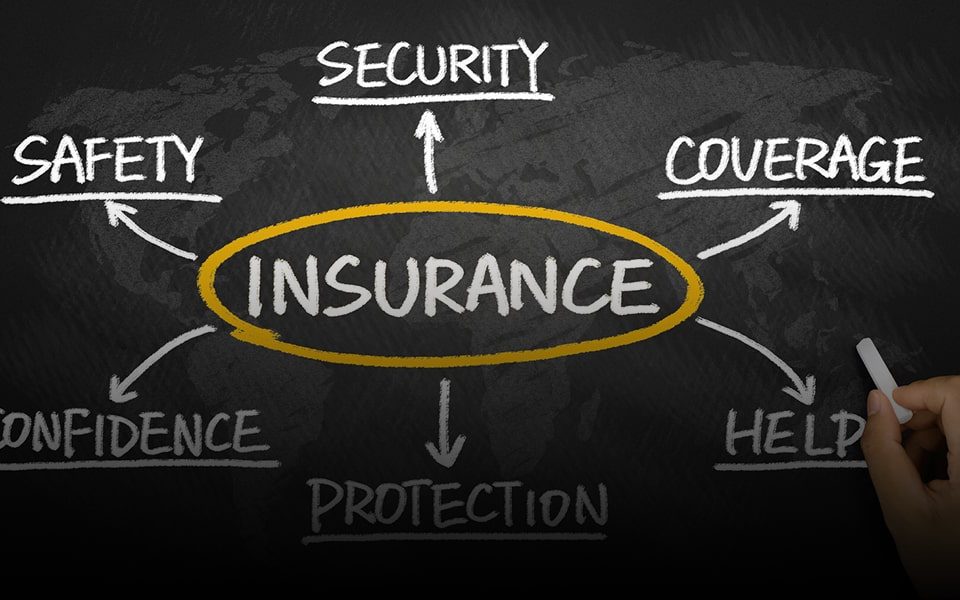 All the details about Iran Insurance companies

All the details about Iran Insurance Companies 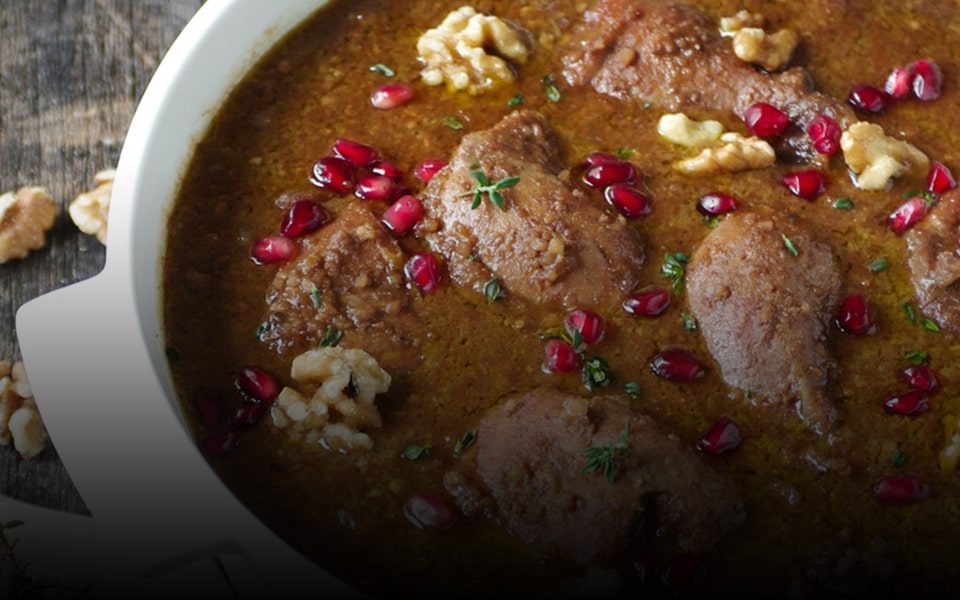 How persian cooks give fesenjoon recipe

How Persian cooks give Fesenjoon recipe? 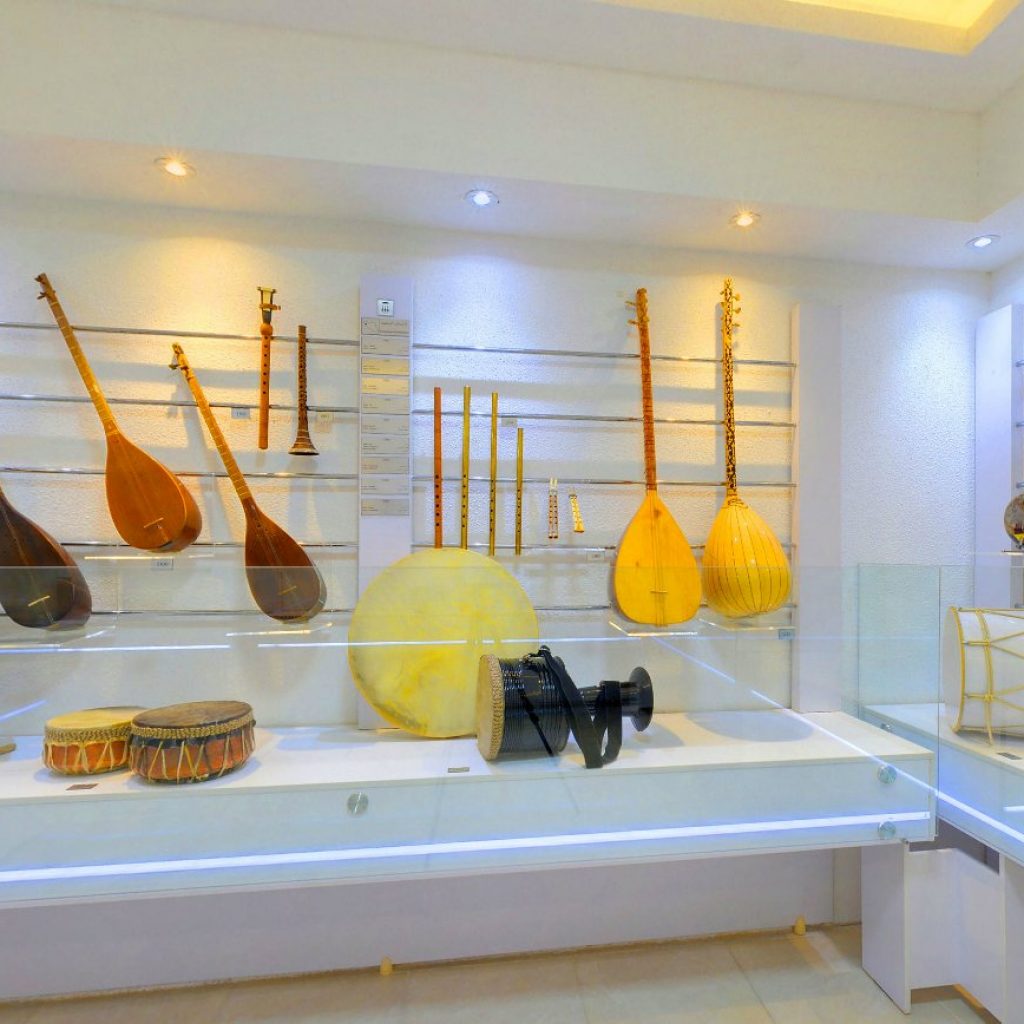 Music of Iran Classical Music Of Iran The repertoire of melody patterns in traditional Persian art music is organized into systems or modes. The seven main […]

Iranian Language The official Iranian language is Farsi, but that is not the only language spoken in the country. Iran is a tapestry of many cultures […]